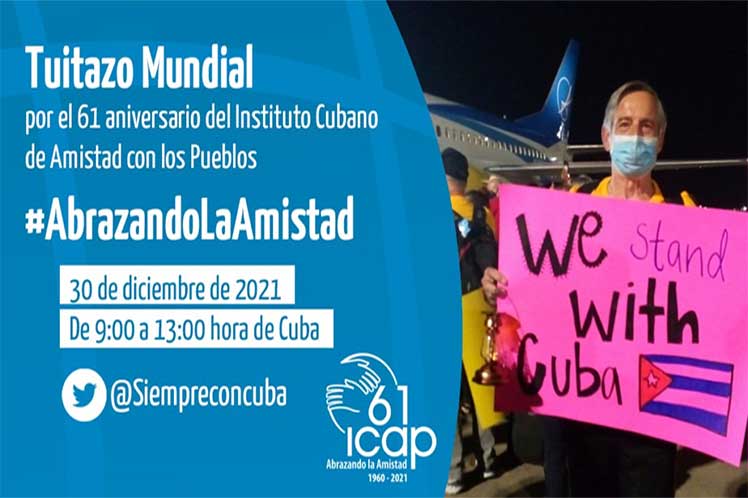 The tweet campaign is called for between 9:00 a.m. and 1:00 p.m. local time in Cuba, and for this the ICAP invited members and organizations in solidarity with the Caribbean nation throughout the planet to share testimonies and experiences of their relationship with that institution.

Likewise, it calls to expose the struggles and solidarity support to the Cuban Revolution and in defense of peace and sovereignty of the peoples.

An essential issue will be to continue demanding the end of the United States’ blockade of the Caribbean nation and the return of the territory illegally occupied by the US naval base in Guantánamo, in the extreme eastern part of Cuba.

Since its creation, on December 30, 1960, by the leader of the Revolution, Fidel Castro, the ICAP has been the confirmation of the solidarity essence of the Cuban Revolution, says the summons.

For more than six decades it has fostered friendship and solidarity from Cuba with all countries and from these to the island, on the basis of respect for peace and the sovereignty of the peoples.

It adds that this institution will continue to promote regional, continental and national events of solidarity with Cuba, as spaces for the coordination of initiatives in support of the Revolution and in support of just causes, for peace, independence and sovereignty of the peoples.

Among those purposes are the demands for justice in Latin America, against the territorial occupation of Palestine and the Sahrawi Arab Democratic Republic, for the independence of Puerto Rico, and for a future of peace and full sovereignty for the peoples. Also during these years, thousands of representatives from the most diverse countries have formed voluntary work brigades, which develop programs of meetings with the Cuban people, and constitute a valuable gesture of solidarity with Cuba.

The call says ICAP has friends in 155 countries from all regions, grouped into 1,647 friendship organizations and 70 associations of graduates of different levels of education in Cuban schools and universities.