USA-Cuba in 2021: From Trump to Biden, nothing has changed 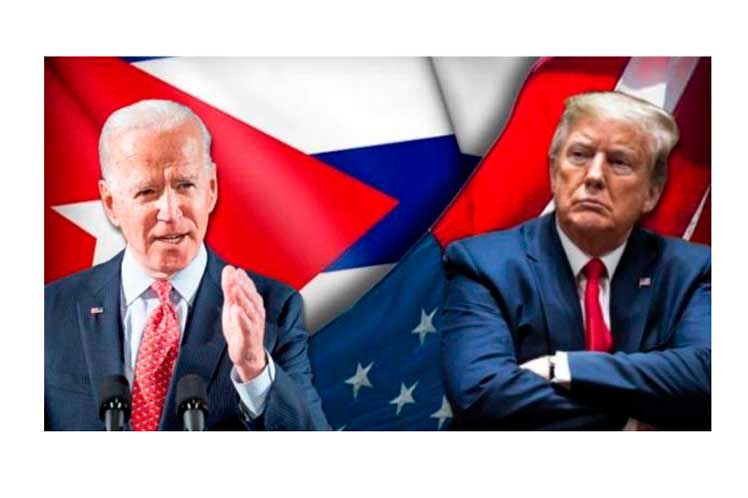 USA-Cuba in 2021: From Trump to Biden, nothing has changed

Havana (Prensa Latina) Days after finishing his mandate as US president, Donald Trump made up his mind to once afresh include Cuba on its unilateral list of nations that sponsor terrorism. It is a line from which current President Joe Biden has kept unchanged nearly a year later.

The President Joe Biden administration has reported that, like the rest of his policy towards Cuba, this policy will also be assessed, as confirmed on December 17 by John T. Godfrey, acting coordinator for Counterterrorism, who assured in a press conference: “What I can say is that the US policy towards Cuba and such a decision are still under review.”

In January, 2021, the United States once again included Cuba on its unilateral list, from which it had been absent since 2015, when it was withdrawn under Barack Obama (2009-2017).

It is an “openly politicized” measure, stressed Democratic Senator Patrick Leahy, one of the most active congressmen in favor of rapprochement between the two countries.

For many observers, the US policies towards Cuba is, until now, the common denominator between Republican Donald Trump and Democrat Joe Biden, despite the fact that the latter bowed (during his 2020 election campaign) that if he won the presidential elections, he would try the rapprochement between both nations. However, during his mandate the two-way relations between Cuba and the United States have kept unchanged. Instead, hostility and aggressiveness continue.

Some experts consider that including Cuba on the unilateral US list of countries sponsors of terrorism is the result of the political opportunism of those officials who feel indebted due to the 2020 November elections or who are already advancing favors in view of the 2024 presidential elections. This is the case that is happening to Joe Biden. He cannot change his stance on Cuba “because of the fear of Florida,” said US academic William LeoGrande.

An article published on June 28 in The Hill newspaper, Mr. LeoGrande, who serves as professor of government at the American University School of Public Affairs, warned that because of this fear, President Biden goes on “reviewing his policy towards Cuba.”

The 2021 year is closing with a tightened US blockade with 243 measures adopted by Donald Trump, 55 of them imposed amid the Covid-19 pandemic.

Plus, the attempts to change the Cuban regime continue with the support of millionaire funds for subversion the United States has allotted for such purposes. There are also no signs of reactivating the brake Trump put on the process of normalizing relations between both countries, which started in 2014 under Barack Obama.

Since Joe Biden took the office in January 20, he has kept unchanged his stance concerning making any direct public statement on Cuba till July 11 insurrections cropped up. A day after the Cuban incidents – which Havana condemned and warned they were encouraged by the United States – Joe Biden expressed his support for the “thousands of Cubans” who took to the streets opposing the “authoritarian regime.” From that moment on, Biden´s opinions on “human rights”, “freedoms”, “universal rights”, allegedly violated in Cuba, followed, and he began to apply sanctions to Cuban officials and institutions, by blaming them for alleged violations against rioters in public disorders.

Joe Biden “seems to be supporting another revolution ‘of color’, orchestrated and financed by the United States,” aiming to overthrow Cuba´s legitimate government, the pacifist Cindy Sheehan told Prensa Latina.

Meanwhile, Medea Benjamin, co-founder of the Code Pink organization, assured that it is too criminal for President Joe Biden to continue his hostile measures on Cuba when he could lift all these coercive measures at a stroke.

On December 21, the White House announced its refusal to provide non-humanitarian or non-trade-related assistance during fiscal year 2022 (October 2021-September 2022).

Although in practice, the US blockade prevents it, they said to not allow international loans to Cuba because, according to Washington’s standards, Cuba does not do “enough to fight human trafficking.”

In a memorandum addressed to US Secretary of State Antony Blinken, President Biden expressed his determination “with respect to the efforts of foreign governments in relation to human trafficking,” an accusation that the Cuban authorities branded as libelous and that only poke the fire of hostility.

“By imitating the immoral slanders by Donald Trump, current US foreign policy calls into question its sincere commitment to confronting Human Trafficking, while vulgarizing the international effort to crack down on it,” the Cuban Foreign Ministry (MINREX) said. In turn, he condemned that the White House is intending to “discredit Cuba’s international cooperation, for which our country has been recognized by dozens of governments (…) and the praise of the United Nations (UN), the World Health Organization (WHO) and other international bodies.”

President Biden does not seem to learn how to handle the political risks on Cuba issues, particularly as the 2022 midterm presidential elections draw near in which Democrats will try to retain their narrow majorities in Congress.

Historical patterns suggest that Democrats´ control will slip away at least in the House of Representatives.

In Leo Grande’s standpoint, Democrats are still suffering from “electoral post-traumatic stress disorder since Al Gore lost in Florida – and the presidency – to George W. Bush by 537 votes, a loss in which Cuba was the major issue and Cuban-Americans played a pivotal role. ”

The US academic recalled that Joe Biden’s 2020 campaign strategy in Florida was to talk as little as possible about Cuba because nothing he could raise would make him win votes, while anything he said would mean losing some.

Poor electoral performance in 2020 exacerbated those fears because of Florida´s dominant role in political calculations for 2022 and beyond.

During his presidential electoral campaign, Joe Biden guaranteed he would pull out Donald Trump’s sanctions that harm Cuban families. He would reestablish trips to Cuba and address issues of mutual interest with the Cuban government.

However, “He says X, but means Y,” runs a popular saying, and on the way to his first 12 months in office – as pointed out by a diplomatic source – Trump’s autopilot is hooked up to Joe Biden, with no signs of changes in bilateral relations with Cuba.

In contrast to this, solidarity with Cuba in the United States multiplied in 2021. Caravans and marches opposing the US blockade, resolutions in more than twenty cities in that country calling for the lifting of such a hostile policy and even requesting Cuban medical cooperation in the context of fighting Covid-19, the campaigns for the purchase of syringes and food for Cuba, the 30th Pastors for Peace Caravan that visited Cuba in past November, the lighting of nights in New York with posters supporting Cuba, as well as the initiatives by Bridges of Love project, are just a few examples.