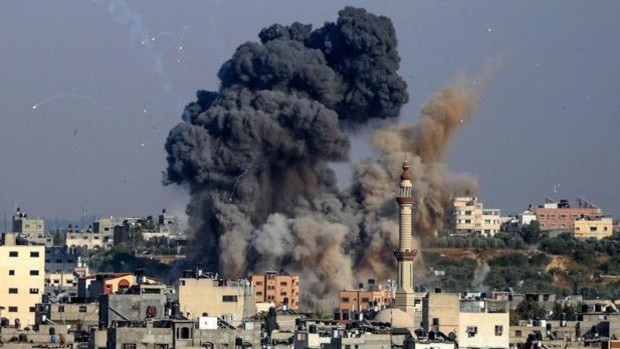 According to a military statement, fighter jets last night bombed a site used by Hamas, located west of the city of Khan Younis, while artillery opened fire on areas in the north of the coastal enclave, where more than two million Palestinians live.

The IDF announced that Palestinian militiamen fired at least two surface-to-air missiles at Israeli helicopters that were flying over the strip during the incursion, although without hitting the aircraft.

The Army indicated the operation was in retaliation for the launching of two rockets yesterday that fell off the coast of Tel Aviv, although Palestinian sources assured that it was a mistake made during tests.

The exchange of blows coincides with an increase in tension between the two parties that threatens to break the fragile truce.

A week ago, a dozen Palestinian groups carried out large-scale maneuvers in that coastal enclave, amid threats from Israel to launch a new aggression.

Days before, representatives of the Hamas and Islamic Jihad militias held a meeting to coordinate their operations in the face of a possible confrontation with the IDF.

Since Hamas seized power in the coastal enclave in 2007, the neighboring state has applied an iron blockade against the territory, despite criticism from the international community for the humanitarian consequences for its inhabitants.

Both Hamas and the Islamic Jihad group recently warned of a new escalation if the siege and the process of rebuilding the strip continues, devastated last May by 11 days of intense Israeli bombing, which killed more than 250 people and hundreds of others. wounded.

Faced with international pressure, the Jewish state promised after the offensive to allow the entry of basic products, construction materials and money for rehabilitation, but to date with various justifications it has limited the process.

Islamic Jihad threatened Israel with harsh reprisals on the eve of the death of Palestinian Hisham Abu Hawash, who has been on a hunger strike for 138 days to demand his release.