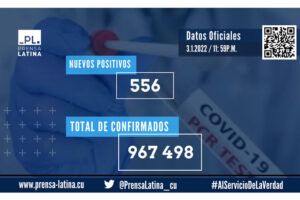 The Public Health Ministry (Minsap) reported on its web page that 17,869 samples were studied for epidemiological control at the closing of the 2nd of this month, a figure which now totals 11,731,194.

Of the total number of cases, 105 come from abroad and 15 are being studied to determine the source of infection.

A total of 234 medical discharges were granted, for a cumulative total of 957,26 patients recovered (98.9 percent).

There are 2,91 active cases admitted to health institutions, of which 2,67 maintain a stable clinical evolution, 20 are serious and four are critical, according to the publication.

On the other hand, the national director of Epidemiology of the Minsap, Dr. Francisco Duran, reported in a television conference that at the end of week 54 this country reported four deaths and more than 137,000 samples analyzed due to the increase in daily cases.

He explained that Cuba has so far accumulated 72 infections with the Omicron variant of the SARS-CoV-2 coronavirus, which causes the disease, 29 of them coming from abroad and nine of the rest are being worked on to determine the source of infection.

He specified that this variant is known to be highly contagious and to have mild symptoms and, in the case of our country, some patients were asymptomatic at the time of diagnosis.