Over 20 million US people under winter storm alerts 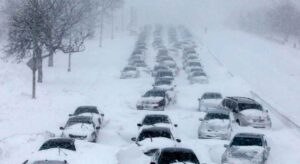 Over 20 million US people under winter storm alerts

The Federal government in Washington, DC, is closed Monday, and weather-related disruptions are being felt across the country. Many schools have canceled classes, and the New York City Department of Emergency Management issued an alert Monday morning, when the fall of up to 25-cm snow in the region is expected.

Weather conditions prevented President Joe Biden´s helicopter from taking off, who after a weekend in Delaware was heading to the White House from Andrews Air Force Base, in Maryland.

In New Jersey, Gov. Phil Murphy declared a state of emergency for five counties in preparation for the storm, which is expected to bring heavy snow, wind gusts, and coastal flooding in southern parts of the state.

More than 500,000 homes were without power this morning and many Covid-19 diagnostic testing and vaccination sites were closed in Virginia and Maryland due to the storm, the Associated Press reported.

The National Meteorological Service forecast wind gusts of up to 56 km/hour and warned about difficulties for transportations amid adverse weather like today.

The winter storm, coupled with disruptions brought on by the Covid-19 cases surge, prompted more air travel cancellations or delays as many people try to go back to work after New Year’s Eve celebrations.

Over half of flights scheduled for Monday morning were postponed or canceled at Ronald Reagan National Airport, Baltimore International and Washington Dulles, according to FlightAware.com.