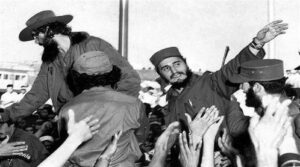 With a reference to the assessment of its former leader, Rodney Arismendi, on January 1, 1959, the PCU evoked the arrival in Havana of the revolutionaries led by Fidel Castro, defeating one of the most bloodthirsty and corrupt dictatorships financed and armed by the United States.

“The Revolution, continuity of the struggles for independence led by José Martí, put an end to Cuba’s condition of Yankee colony and the Moncada program, the Commitment assumed with its people, was fulfilled point by point” declared the Uruguayan political organization.

It mentioned the commemoration of 60 years of the literacy campaign, agrarian reform, free health and education for all, women’s rights, nationalization of the main means of production, equality as a social objective.

The PCU denounced that “Yankee imperialism and the corrupt and bloodthirsty oligarchy displaced from power did not give a day of truce to the Revolution, hundreds of attacks, the Bay of Pigs invasion and the longest blockade in history against a people”.

He also stressed that Cuba was an example of solidarity with the Latin American peoples, the whole world, and in particular Uruguay as a refuge for thousands of compatriots in the dark night of fascism, the outstretched hand with Operation Miracle, “Yes I can” and the prosthesis bank.

In a recount he pointed out that 2021 was very difficult for Cuba and its people with the Covid-19 pandemic and application by U.S. President Joe Biden of the same hostile measures of Donald Trump and in the midst of it he developed his own vaccines.

“Cuba, its Revolution and its people earned the right to solve their problems without interference,” reaffirmed the PCU as well as its full solidarity and rejection of “the provocations mounted by Yankee imperialism, supported by the government of Luis Lacalle Pou and the right-wing coalition.”