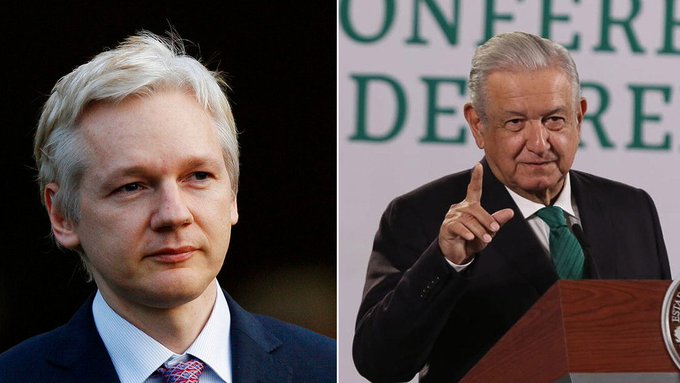 The Mexican newspaper recalled that in his first morning conference this year, President Andrés Manuel López Obrador revealed that in the last days of Donald Trump’s administration (2017-2021) he asked him in writing to exonerate Assange of the charges fabricated by the US justice system.

There he reiterated his government’s offer to provide asylum to the Australian informant, likewise, he considered that Washington “must act with humanism” in view of the fact that “Assange is ill and it would be a sign of solidarity to give him asylum in the country where he decides to live”.

He recalled that Assange is being held in a London prison while waiting for the UK Supreme Court to decide on a defense appeal to prevent his extradition to the United States, where he would face 18 charges and a 175-year prison sentence, and subjected to prison conditions that would aggravate his broken health.

Contrary to what the superpower’s executive would have us believe, the prosecuted informant is neither a spy nor a cybercriminal, but an individual who decided to expose the most sordid secrets of various governments with information obtained through digital leaks, the newspaper said.

Thus, he explains everything concerning the case to prove it, as in 2010 when WikiLeaks released to the world documents proving the commission of crimes against humanity by U.S. forces and their allies in the wars in Afghanistan and Iraq.

The following year, the activist delivered to several news media around the world, including La Jornada, the so-called “State Department cables” that revealed Washington’s unscrupulous and interfering diplomatic practices in several countries.

In the journalistic preparation of this material, this newspaper published, for example, reports by former U.S. Ambassador Tony Garza, in which he boasted of playing a central role in the consolidation of Felipe Calderón in the presidency.

Also a dispatch documenting the offer made by the then Secretary of Public Security, Genaro Garcia Luna (imprisoned and tried in the United States), to the former Secretary of Homeland Security of the neighboring country, Michael Chertoff, to give him “full access” to all Mexican intelligence information.

It is clear that the U.S. government’s eagerness to pursue Assange does not respond to a zeal to fight common crimes but to a design of revenge for the discredit that its institutions experienced due to the WikiLeaks disclosures, concluded La Jornada.