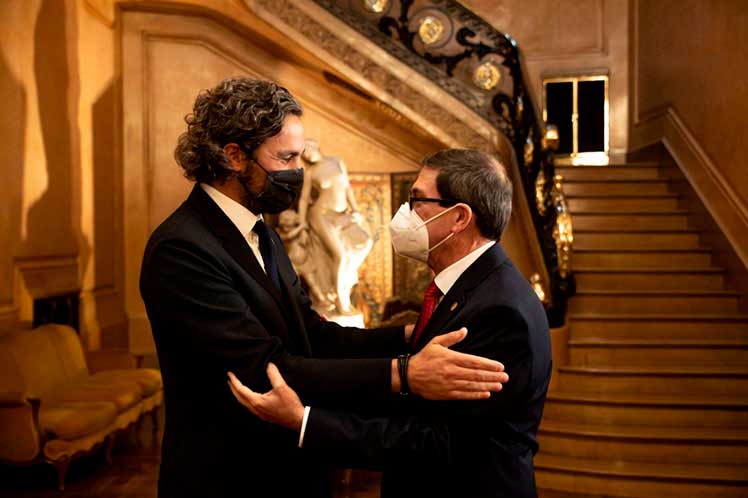 During the talks, both Ministers of Foreign Affairs signed the Trade Exchange and Cooperation Agreement between the two nations, which constitutes the update of the current agreements on this matter to increase bilateral trade.

Likewise, Cafiero and Rodríguez, together with the Secretary of Agriculture, Matías Lestani, signed a Cooperation Agreement for Agricultural Development, with the aim of promoting Cuba’s food sovereignty by increasing its productive capacity.

In this sense, the creation of an Agricultural Technology Training and Transfer Center is contemplated, aimed at the development of direct sowing and attention to small and medium-sized producers in Cuba. Likewise, Argentine businessmen will have access to the benefits granted by the legislation in force on the island.

The Cuban Foreign Minister, who arrived in Buenos Aires to participate in the XXII Summit of Foreign Ministers of the Community of Latin American and Caribbean States (Celac), thanked Argentina for the rejection of the economic, commercial and financial blockade imposed by the United States. more than six decades ago.

Also the gesture of the Argentine people and government to send donations of medicines and medical supplies to the Caribbean nation, during the most complex stage of Covid-19.

Rodríguez once again reaffirmed his country’s position in supporting Argentina’s struggle for the right to sovereignty over the Malvinas, South Georgia and South Sandwich Islands and the surrounding maritime spaces, territory usurped by the United Kingdom.

For his part, Cafiero thanked the Cuban delegation for the visit to the Celac summit, where the host country will present its proposal to assume the pro tempore presidency of this regional mechanism this year.

Since the day before, the different delegations that make up Celac, made up of 32 countries, began to arrive in Buenos Aires, who today will be at a dinner that will be provided by President Alberto Fernández, at the Kirchner Cultural Center.