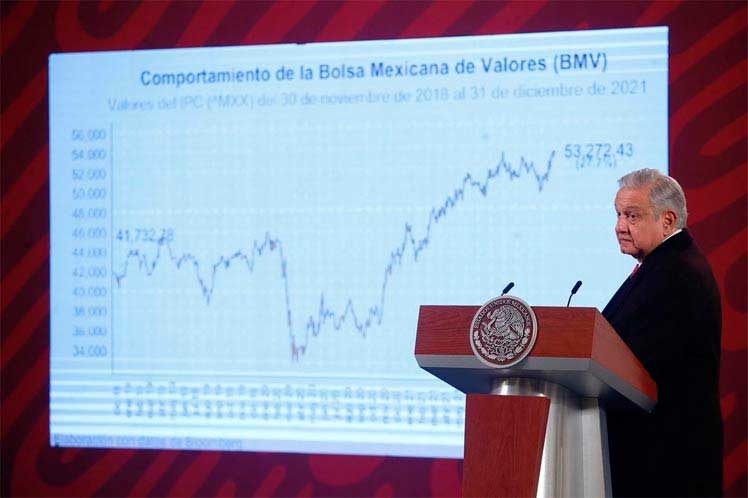 The president inaugurated a new session at his morning press conference that will be held on the first Thursday of every month to report economic and social results in order to reveal how the country is doing regarding income, debts, inflation, employment, stock market, banks, prices, salary and social development.

Using charts, Lopez Obrador explained that the stock market is recovering by 25.7 percent. The exchange rate is also recovering because, due to the pandemic, the national currency depreciated up to 25 pesos per dollar, and it is now at 20 pesos per dollar, like at the beginning of his term in 2018, without depreciation, something not seen since the Adolfo Lopez Mateo administration.

The foreign debt increased by 13.2 percent in the first three years of his administration, due to the worst economic crisis in the past 100 years, a decline the country had not had since the 1930s.

However, this is not a new debt but an appraisal of interests. He admitted that the main challenge of his administration is inflation, which rose higher than the highest point during the Peña Nieto administration, that is, 7.7 percent.

The current inflation is at 7.73 percent and is a phenomenon of 2021 that is expected to be temporary, although it depends on external factors and the pandemic.

This is due to the impact on international production, prices, the increase of steel, transportation and freight prices, and more demand in the world due to investment funds, more circulating money but less supplies because there are no products and that affects Mexico.

Regarding employment, he reported a decline in December due to the deceitful dismissal of workers to avoid paying them benefits, bonuses or prevent them from accumulating rights. They are re-hired in January in a maneuver contrary to workers’ interests. Lopez Obrador charged that they do not pay the income tax in December either and warned that this is not a threat, but they will check it. He also reported the evolution of salary and revealed that the average amount earned by more than 20 million people covered by social security is 13,253 pesos per month (662 dollars).

The president noted that the purchasing power of the salary had increased despite inflation and thanked Mexicans abroad again because they broke the record again by sending remittances to their families, which total 51.6 billion dollars (1.2 trillion pesos) and benefit 10 million households.