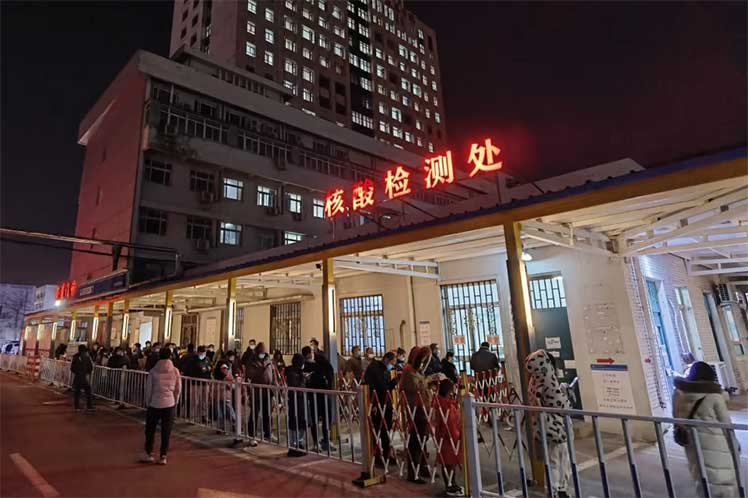 Beijing, Jan 9 (Prensa Latina) The local government of Tianjin (northern China) is working today under health contingency conditions to neutralize a new outbreak of Covid-19 with the Omicron variant of the SARS-CoV-2 coronavirus, which left 20 cases in a few hours.

Experts emphasize that this is the country’s first real battle against this mutation of the virus and the main concern is that those infected in the last few days did not travel domestically or abroad, but they are not close contacts of the patients detected last December.

Tianjin applies PCR tests to its 15 million inhabitants in search of asymptomatic patients, has 75,680 citizens from 29 communities in confinement, suspended operations in some subway lines and called on the population to avoid leaving the territory because an increase in infections is expected.

According to reports, of the total number of cases confirmed so far, 15 are elementary and junior high school students.

The two main universities in the area restricted mobility and postponed the end-of-semester exams, while the connection points with Beijing tightened health controls and many vehicles were persuaded to return.

The Chinese capital even asked those who recently visited Tianjin to remain in self-isolation and report themselves to the community authorities.

Although China assures that its strategy against Covid-19 is effective against the Omicron variant of SARS-CoV-2, the Government said it will tighten control and prevention especially for travelers coming from abroad.

So far, three provinces in the country have reported infection with this new mutation and Hong Kong has accumulated 240 cases.

Overall, China has accumulated at least 5,699 deaths and 133,770 cases in its mainland, Hong Kong, Macau and Taiwan since the emergence of Covid-19 and the pathogen that causes it in December 2019.

It has 86 percent of the population is fully vaccinated against the disease, which ensured to create a barrier of immunity.