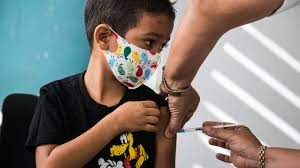 There are several strategies in the country to face this coronavirus that causes the Covid-19 pandemic, but immunizing the pediatric population was one of the most successful, Dagmar Garcia, the director of Research at the Finlay Vaccines Institute (IFV), said recently.

In messages on Twitter, the scientist from the IFV, which developed the Soberana 02 and Soberana Plus vaccines and the Soberana 01 candidate, highlighted the value of the decision, made responsibly in Cuba months ago.

“Without nationalist chauvinism and without excesses of believing that we are the first in everything. In this case, YES, we were the first to vaccinate all children from the age of two, because we have a vaccine that is, again without chauvinism, the best option in terms of safety and immunogenicity for Cuban children and well beyond,” she asserted.

She highlighted the determination of medical and science institutions when they decided to “go for the pediatric space” and vaccinate children with Soberana 02, which is a vaccine designed for them, she said.

“Today, with regard to the Omicron variant, having immunized all our children older than two years (about two million) is a measure that can make a difference,” she added.

About Omicron, Garcia had recently explained that it wisely combines a series of mutations in protein S, which makes it more transmissible and more elusive of immunity.

She pointed out that Omicron surpasses Delta in transmissibility, as well as some other viruses such as measles and, with it, cases will continue rising, but serious, critical or deceased patients will not increase significantly.

Since mid-December the alerts of several Cuban scientists began. We explained that it was a matter of time and the high numbers we once wanted to forget would return, and it would be quick, in January, she noted.

However, the doctor pointed out, the vaccination of the majority of the population will change the scenario in Cuba.

“Decisions that were made months ago: start immunization through a health intervention, mass vaccination of children, that of convalescents. This means that we can handle cases differently in the face of the new wave,” Garcia added.

She noted that that advancing the reinforcement of the adult population to three months is the most effective strategy right now, thanks to the fact that we have the necessary doses of Soberanas and Abdala to do so.