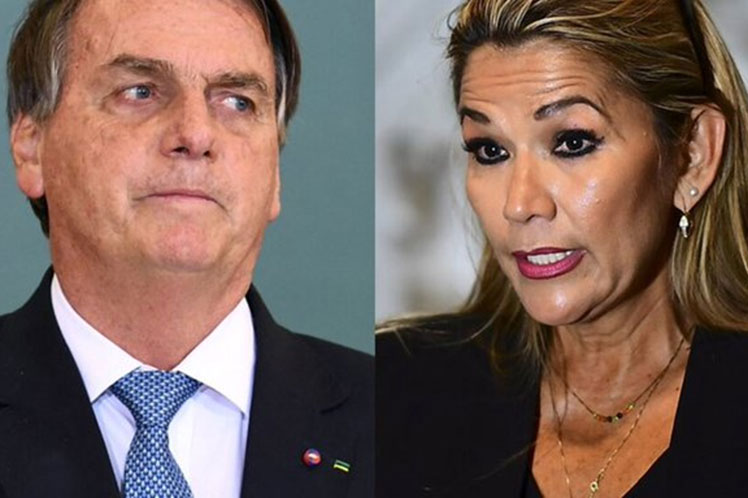 “The former president of Bolivia, Jeanine (…) I was with her once, she is a nice person who is imprisoned,” assured the Brazilian president in an apparently involuntary expression, according to the River Plate newspaper.

With no news to date of any official meeting between the two, the possible secret conversation emerges as the visible tip of an ice floe under which the support of the South American giant for the sectors that overthrew constitutional president Evo Morales, on November 10, 2019.

The journalistic investigation refers this skein presupposes clandestine flights, the escape of ministers and perhaps the delivery of weapons to the coup sectors of the Andean-Amazonian nation.

Page 12 comments that Bolsonaro angrily mentioned the accusation against Áñez of “anti-democratic acts”, as if attacking constitutional institutions did not deserve to arrest and prosecute the former de facto ruler.

It adds that Bolsonaro did not specify where or when his meeting with Áñez took place between November 2019 and December 2020, the month in which the current president, Luis Arce, took office after winning the elections.

However, he points out in that period of just over 12 months, the Bolivian presidential plane flew frequently and clandestinely to Brazil, an operation that could only take place with the authorization of the de facto head of state or with her on board.

Another note from the Argentine newspaper states that “in the early hours of November 11, when Áñez had not yet assumed the presidency, FAB 001 took off from the Campina Grande airport, Sao Paulo, to the international airport of Brasilia.”

He adds that according to the records of the FlightAware controller, it remained there for four days, on November 15 it left for Sao Paulo and 48 hours later returned to Brasilia.

The source indicates that on November 22, the FAB-001 returned to Rio de Janeiro and returned to the Brazilian capital on the 23rd, the date on which it flew to Manaus, in the Amazon, a region in which it remained until the 26th, and one day, finally, it headed for La Paz.

According to Page 12, during all that time Áñez was in the Bolivian capital. On the other hand, some YouTube channels that usually support Bolsonaro, apparently aware of the seriousness of his confession about the meeting with Áñez, removed it from the network.

This possible evidence could be submitted to the consideration of the court that, starting this week, will try the former de facto ruler and the former military and police chiefs in the process called Coup d’etat II.