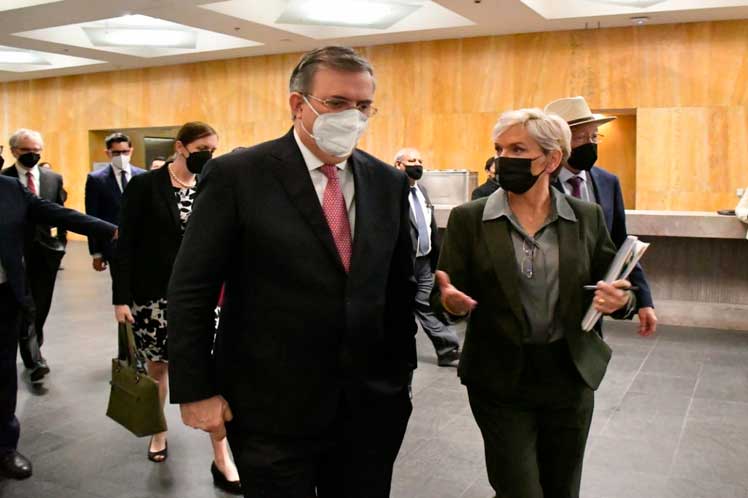 Mexico, Jan 20 (Prensa Latina) The Foreign Minister of Mexico, Marcelo Ebrard, received today at the headquarters of that office the Secretary of Energy of the United States, Jennifer Granholm, who is making an official visit.

The senior US official will meet with President Andrés Manuel López Obrador. A few hours after her arrival, she went to the Foreign Ministry where she was received by Ebrard and officials who attend North America and the energy section.

In his welcome, Ebrard said that Granholm’s visit is conducive to the search for a relationship on energy matters for the coming years and that with his presence the conversations between Presidents López Obrador and Joe Biden on that subject are followed up and he hopes there will be progress in the near future.

For her part, the US secretary was pleased to be visiting a country like Mexico, a great ally of the United States, and also mentioned the meetings that the two leaders had in Washington in which they emphasized the importance of a strong North America.

We are excited to be able to continue with that, and particularly -since I am the Secretary of Energy- in strengthening this energy part because Mexico has an enviable and amazing series of clean resources that we want to talk about.

Like all friends, he admitted, there may be issues that we will also have to work on, such as the electricity reform that Mexico is promoting, but we know that in the end we are going to be strong allies that firmly support a strong North American economy and I really appreciate the friendship and look forward to conversations.

Shortly before, López Obrador, who will receive her at nightfall at the National Palace, declared there was no forbidden topic and that everything would be discussed, from which it follows that the issue of the electrical reform questioned by Washington will be part of the dialogue.

The Joe Biden administration official will meet with other industry leaders, including Energy Secretary Rocío Nahle, and with members of industry and civil society.