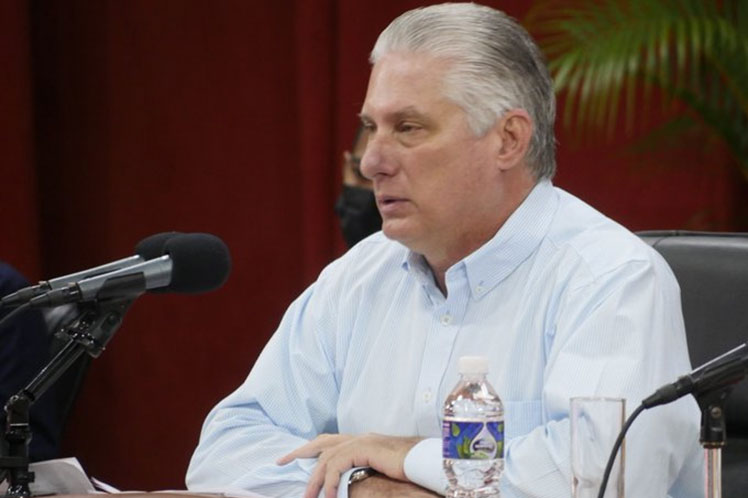 Díaz-Canel attended the Party Balance Assembly this Friday in the municipality of Sancti Spíritus, last of an assembly process at that level developed in this central territory, prior to the provincial meeting.

After acknowledging there was a profound debate on the report presented, the first secretary of the Central Committee of the Communist Party of Cuba expressed the economic, commercial and financial blockade of the United States against the Island is a perverse action.

He stressed that in terms of the political-ideological strategy, it is necessary to implement the ideas, concepts and guidelines emanating from the 8th Party Congress, held in April 2021.

The president also referred to the work with children and young people, giving them participation, as well as the exemplary role of the militants and developing more attractive work styles that focus on solving problems.

He called for the socialization of experiences related to community projects, attention to new economic actors, work in the neighborhoods and the improvement of work in the communities, emphasizing the spiritual growth of its inhabitants.

He pondered the vaccination scheme in the country and the thought of the historical leader of the Cuban Revolution Fidel Castro Ruz (1926-2016) regarding science, which must be promoted, he said.

Roberto Morales, member of the Political Bureau and Secretary of Organization and Politics of Cadres, pointed out that it is necessary that the best be in charge of the groups and Party Committees.

The interventions dealt with food production, political-ideological subversion, the role of social networks and the implementation of the more than 60 measures applied in the country to promote the agricultural sector.

They included the internal workings of the Party and its links with the mass organizations and the Union of Young Communists, cadre politics and knowledge of history.

The members of the Municipal Committee of the Party and its Executive Bureau, and the delegates to the Provincial Assembly were elected, while Julio Luis Jiménez was ratified as first secretary.

Finally, Deivy Pérez, member of the Central Committee and first secretary of the Party in the province, recognized the good development of the assembly and congratulated the elected comrades.