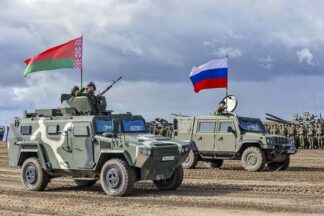 Divisions of the Russia´s Eastern Military Region will also intervene in the unscheduled inspection of the Union State (Russia-Belarus)reaction forces, which will take place next month in this nation, the Minsk military body reported on its Telegram channel.

This entity informed that the verification will take place in two stages and in the first, before February 9, the redeployment and formation of troop groups will be practiced, as well as the defense of important state-owned and military installations and the state-owned border in the airspace.

The second stage, from February 10 to 20, will be the Allied Resolution 2022 joint maneuvers, which will include exercises to repress and repel external agressions, fight against terrorism and protect the interests of the Union.

The training will carry out at the Domanovsky, Gozhsky, Obuz-Lesnovsky, Brest and Osipovichsky training grounds and at the Baranovichi, Luninets, Lida and Machulischi airfields, all in this country.

The head of the international military cooperation department of the Belarusian Defense Ministry, Oleg Voinov, emphasized that the exercises take place “in the context of the aggravation of the military and political situation in the world, the continuous increase of tensions in Europe, including near the western and southern borders of Belarus”.

Also on January 18, Russian Deputy Defense Minister Alexander Fomin stressed that the upcoming military exercises between his country and Belarus will assess the responsiveness of their Armed Forces to ensure coalition security.

He explained that in December the presidents of Russia and Belarus, Vladimir Putin and Alexander Lukashenko, agreed to carry out an unscheduled check of troops and assess their readiness to ensure military security.