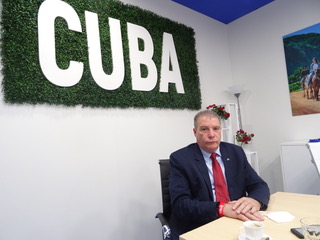 In an exclusive interview with Prensa Latina during the Tourism Fair (Fitur) in Ifema-Madrid, the Cuban Minister of Tourism, Juan Carlos García, pondered the relevance of this industry showcase without chimneys in the Spanish capital, where representatives from 107 countries met.

Fitur is one of the most important for Cuba from the strategic point of view. Since the pandemic began, the fair had not really had a rebound of the magnitude of this year, with which many tour operators that work in our market were able to exchange first-hand to make an updated evaluation, García commented.

“It can be said we were able to appreciate that we are closer to a true recovery of tourism worldwide (…) and the consensus is very favorable for Cuba, although it may not be as quickly as one would like, but everyone takes stock of that we are ready to receive customers,” he argued.

The minister of the Caribbean island announced that the goal for 2022 is to receive 2.5 million foreign tourists.

However, he admitted that everything will pass because the issuing countries “begin to have greater control of the pandemic and thus achieve the level of visits that we want.”

The aspiration is to get as close as possible to the range we reached in 2019 and the idea of ​​receiving two and a half million travelers may be feasible, he said.

To another question from Prensa Latina, related to the strengths and weaknesses of the sector globally and in particular, García acknowledged there is a lot of work to be done, although significant investments have been made in repair, protocols validated in 2021 that are updated, maintenance and training that offer a good basis for the development of the sector in Cuba.

In this line, he expanded by underlining two essential edges to continue on the path of progress with a view to rescuing consumer confidence in the destination: first, control of the pandemic, and then the quality that must be equal or superior to the countries of the competition.

The minister of the largest of the Antilles pointed out that the results so far are favorable, as reflected in the polls.

“Although I am optimistic, what has been achieved cannot be neglected, we must consolidate and improve our products,” he added.

In the final stretch of the dialogue with Prensa Latina, the questions dealt with the impact of the unstoppable new technologies and the obstacles that the US economic blockade poses to Cuba for its more comprehensive development.

We are going at a good pace in the computerization and digitization and we are expanding the possibilities of navigation in all the spaces of the tourist facilities, with the diversification of Wi-Fi services, he added.

The most visible results are the traveler’s platform, which will make it possible to include health and immigration requirements from home and access them through a QR code.

Likewise, online pre-check-in and an electronic commerce platform were launched, with the possibility of paying with a card that the hotels will provide.

The capacity of engineers and professionals in this domain allowed for various applications to facilitate the Internet environment for tourists, he reflected.

The Cuban minister pointed out that the US blockade has been present since the island began tourist activity.

Now most of the 243 Trump (Donald) measures are still in force, all focused on curbing the development of tourist activity in our country, he said.

It is up to us, in the face of this permanent aggressiveness, to find formulas and methods to reactivate tourism and reinforce the work with our most notable emitters, such as Canada, Russia and Europe, he argued.

García was satisfied with the steps taken by the Cuban government for a controlled and staggered reopening, “which as a guarantee has a strengthened health system and more than 93 percent of the population vaccinated with at least one dose.”

In this sense, the headline specified that 85 percent of Cubans have a complete vaccination schedule and more than 24 percent with a booster dose, in addition to highlighting that the entire campaign is carried out with three of their own immunogens generated in laboratories of the largest of the Antilles.

We can say with great modesty that our country ranks second in the world in vaccination rate, after the United Arab Emirates, he concluded.