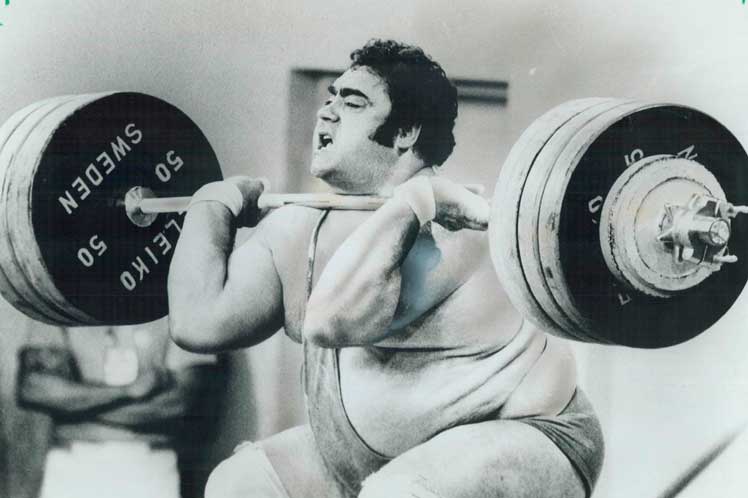 For him nothing was enough: he proclaimed himself the best gardener, cook, carpenter, singer and pool player perhaps from all over his country, the former Soviet Union.

Born on January 7, 1942,the so called uncle Vasili was the first athlete to lift 600 kilograms, when there were three movements in that sport (startup, lunge and power) and 400 kg in biathlon, the latter eliminated because it was harmful for the health of athletes.

A gold medalist at the Olympic Games in Munich 1972 and Montreal 1976, a world and European champion on several occasions and 80 times world record holder, including inthe 440 kg category, which prevailedfor two decades, from 1976 to 1996. These are his best credentials.

When the power movement was eliminated,he made progressin lunge, since startup was his only “weakness”.

At the age of 28, he participated in the world championships for the first time, held in the United States in 1970, where he set several records, including that in 600 kg in the then triathlon.

At that time his physique didn’t impress that much, since he “barely” weighed 136 kg (299 pounds), but he began “growing” that huge “belly” which would be like a distinctive seal for him.

His performance in the U.S. city of Columbus, Ohio, meant the beginning of the legend. From then on, and during the first eight years of the 1970’s,Alexeev was undefeatable and won an equal number of world titles, plus two at the Olympics.

Scenes personally seen in Montreal, Canada, came to my mind, in which Alexeev came to hold on to his Olympic title.

That giant, who already weighed 159 kg (350 pounds), with a height of 1.80 meters, entered the stage astonishingly relaxed and confident and, evenwithout thinking about it, he faced impressive discs on the bar. He had little difficulty in bringing his efforts to a successful conclusion and that was it, another record, another medal. There he literally stole the show.

He began lunge very easily –for him, of course- with 230 kg on the bar which gave him enough advantage, makingeverybody think that he would be pleased at it. But he was not;he came back and increased it to the 255, another 25 kg!and seta new world record.

He attempted to win the third attempt to take the record to 260 kg, but confessed that he was very tired.

In any case, he had already proven, without a doubt, that he was the strongest man in the world. He died on November 25, 2011.