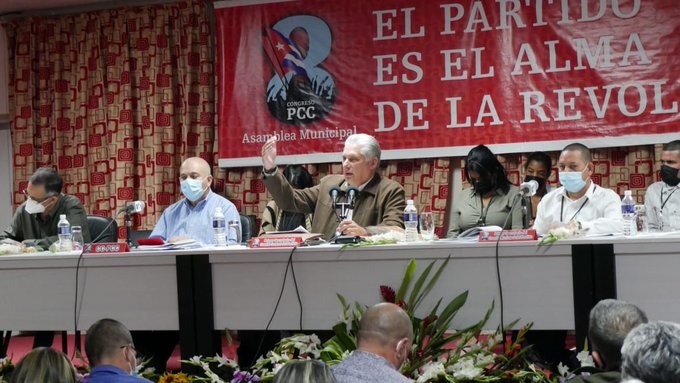 Havana, Jan 29 (Prensa Latina) The first secretary of the Communist Party of Cuba (PCC) and president of the Republic, Miguel Diaz-Canel, on Saturday insisted on the leadership of that organization, on the importance of strengthening political-ideological work and on discussing the people's concerns.

During the PCC balance assembly in San Jose de las Lajas municipality, in western Mayabeque proovince, the president assured that “it is up to the Party to take care of everything.”

He described the meeting as a critical balance that reflected on the problems to be solved, and called on the PCC members to hold more participatory meetings to find solutions to the current challenges.

“Cubans are going to defend the Homeland, order and tranquility, and the PCC has to be at the forefront of this, Diaz-Canel said, according to the Twitter account of the Presidency.

Likewise, he emphasized that Cuba, with its talent, has to overcome the economic, commercial and financial blockade imposed by the United States, on the basis of what he called “creative resistance.”

As he explained, it consists of “resisting creating, innovating, using talent, and an example of this is our vaccines” against Covid-19, caused by the SARS-CoV-2 coronavirus.

One of the issues discussed at the meeting was the need to produce more food, and those present noted dissatisfaction with the provision of land for that purpose.

In this regard, the PCC first secretary proposed that they begin by giving the land to those with higher yields,” with the idea that production is vital to lower prices.”

You have to remove all obstacles, all bureaucracy, he stressed.

For his part, the PCC secretary for Organization and Cadre Politics, Roberto Morales, stressed the importance of not waiting for problems to accumulate and age.

“Being more agile will motivate more young people to be part of the PCC and even to hold responsibilities within the organization,” he pointed out.

In addition, he recalled that there are issues in the political-ideological work that stem from the exemplarity of members and the ability to provide good services.

The PCC balance meetings began in the Havana municipality of Cotorro in November last year, a process that was resumed at early this month.