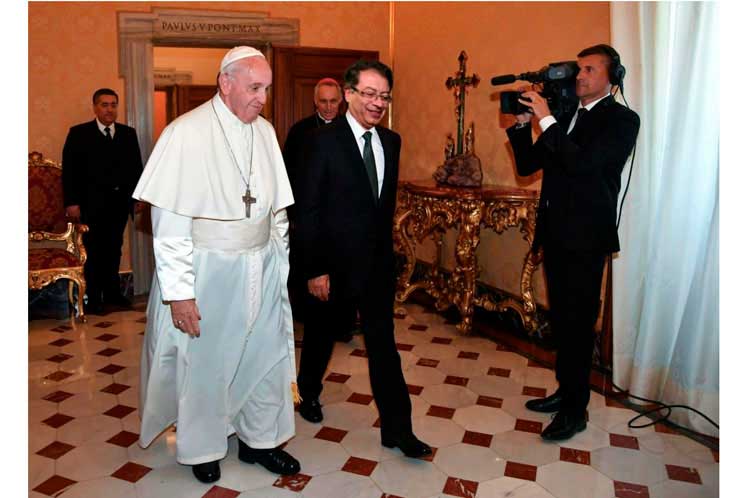 According to press media here, the issues of migration, climate change and human rights of minorities in Colombia were also discussed in the 42-minute conversation.

The meeting at the Holy See drew attention in Colombia because the Supreme Pontiff does not usually meet with aspiring leaders but with practicing officials.

Petro is making a tour of Europe that will take him, in addition to the Vatican, to Italy and Spain, where he will meet with businessmen from various sectors.

The leader of Colombia Humana was in Spain at the beginning of January where he met with the head of the Spanish Government, Pedro Sánchez, among other political figures from that country.

The Historical Pact, an electoral political coalition, which brings together Colombian diversity (indigenous, blacks, peasants, teachers, intellectuals, workers and others), leads the voting intention with a view to the presidential elections on May 29, according to most of the surveys published in the country.

The legislative elections in Colombia will take place next March 13 to elect 100 senators, 166 representatives to the chamber and 16 representatives of the Special Transitory Circumscriptions of Peace.

Meanwhile, the presidential election will be held on May 29 and in it the president and vice president of the country will be chosen for the period 2022-2026.

The winning formula must obtain half plus one of the total valid votes, otherwise a second round will be held on June 19 between the two candidates with the highest number of votes and the candidate who obtains the victory will govern for a single period of four years. .