US blockade on Cuba is cynical and dishonest, deputy FM upholds 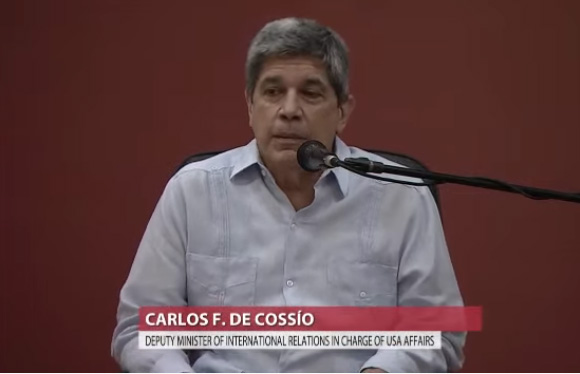 US blockade on Cuba is cynical and dishonest, deputy FM upholds

During a joint broadcast between Cubavisión Internacional, Prensa Latina, Canal Caribe and Radio Habana Cuba, the diplomat illustrated how the such hostile policy damages the lives of the people in the island, and is a systematic, flagrant and total violation of the human rights of Cubans.

Perhaps the best example that show Washington’s true motivation in implementing the blockade is seen in the way it has conducted itself during the Covid-19 pandemic, he said.

Just at a time when the international community was calling for compassion and solidarity, the United States decided to take advantage of the pandemic and strengthen the worst measures of the blockade, he said.

In this way, he said, it decided to make the lives of Cubans harder and put up hurdles in the way of the government’s efforts to face the health crisis and take care of its citizens.

In view of the tightening of the blockade, it was much more difficult for Cuba to acquire materials, medicines, equipment and supplies necessary for the pharmaceutical industry and the health system, Cossio recalled.

So, for US officials to say that they have the welfare of the Cuban people in mind and that their motivation is to protect human rights is tantamount to a great deal of cynicism and dishonesty, the Deputy Minister of Foreign Affairs stressed.

Cossio also addressed the differences between an embargo and a blockade.

According to him, what Washington pursues is not only an embargo, as it goes beyond a simple prohibition of exports and imports between the two nations.

Any product manufactured anywhere in the world that has a minimum component of Cuban elements is prohibited from entering the United States, while Cuba cannot acquire a product that has 10 percent or more of US components wherever it is manufactured, he explained.

For example, Cossio further said, Cuba has great difficulty in acquiring civilian aircraft because the safety systems of the world’s aircraft have more than 10 percent US components. Besides, Washington imposes fines and coercive measures to companies and their executive that want to do business with Cuba.

This illustrates that this is not just a simple embargo, he emphasized, and anyone who says so does not understand the nature of the U.S. economic war against Cuba.