Blockade, an essential tool of the United States against Cuba 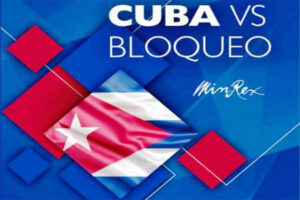 Blockade, an essential tool of the United States against Cuba

According to Ismara Vargas, in charge of Legal Affairs and Analysis at the General Directorate of the United States in the Ministry of Foreign Affairs (Minrex), this siege becomes an act of war and a permanent aggression against the island.

During a recent conversation with students at the University of Havana, she explained that although the blockade was officially decreed on February 3, 1962, its application dates back to the very moment of the revolutionary triumph in January 1959.

At the meeting, which was also attended by Minrex specialists Jorge Luis Cepero and David Ramirez, those present pointed out how the siege seeks to deprive the Cuban people of resources necessary for life and prevent the normal development of the economy.

“This policy is not an abstract concept, but refers to a set of laws, regulations, coercive measures and arbitrary lists applied, in a ruthless manner, by the U.S. government,” the Foreign Ministry’s website emphasizes.

According to a statement issued by the Cuban Association of the United Nations (ACNU), the White House blockade violates international law and the principle of sovereign equality among States; and seeks to reverse the political and social system that the Cuban population has decided for itself, in full exercise of its self-determination.

Likewise, the blockade undermines cooperation between countries and has a very negative impact on the Sustainable Development Goals adopted by the United Nations General Assembly, the text emphasizes.

The signature of then President John F. Kennedy on Executive Order 3447 formalized Washington’s blockade against Havana, which persists to this day and is considered the main obstacle to Cuba’s development.

The unilateral siege, the longest in history against any country, was reinforced during the Donald Trump administration (2017-2021) with 243 coercive measures still in force under his Democratic successor, Joe Biden.