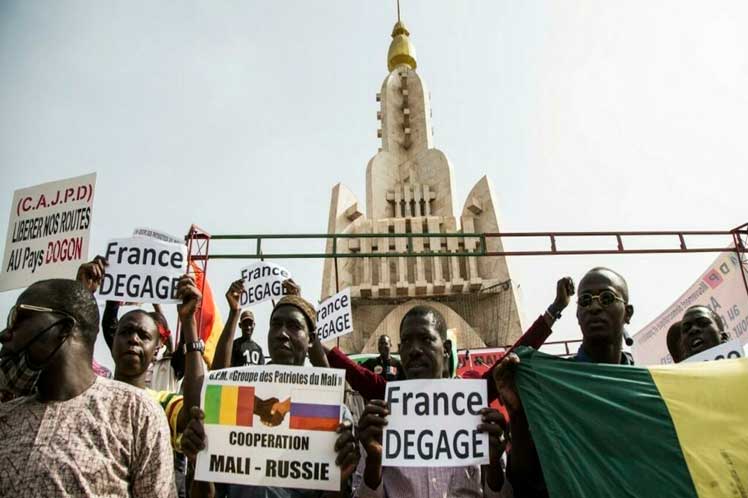 The demand follows a call by the civic organization Collective for the Refoundation of Mali, which considered that the presence of the Gallic military forces prevents the Sahelian State from exercising its full national sovereignty.

One of the organizers of the mobilization, Jeamille Bitar, expressed that “everyone understood that the France failure in the Sahel region, of which Mali is a part, is visible”.

She went on to add: “This neo-colonialist policy cannot continue”.

For his part, the member of the ruling National Transitional Council, Aboubacar Sidiki, demanded that the French military of the so-called Barkhane Operation, which has no legal status in Bamako, leave the country immediately.

Previously, the French government defended that the presence of its troops in Sahel and Sahara areas, together with Western allies, is aimed at exterminating Islamist extremist groups that plague those areas.

In Mali there is a transitional executive, headed by Colonel Assimi Goita, who in May 2021 led a military coup d’état, which forced out the civilian government.

A few months earlier, in August 2020, the late constitutional president Ibrahim Aboubacar Keita (2013-2020) was overthrown by another military coup, in the midst of popular demonstrations due to the economic crisis unleashed on a national scale.

Mali receives another shipment of Russian helicopters and radars

Conflict in Mali causes hundreds of deaths and wave of displaced

France and Europe announce withdrawal of troops from Mali

Mali receives another shipment of Russian helicopters and radars

Conflict in Mali causes hundreds of deaths and wave of displaced

France and Europe announce withdrawal of troops from Mali