President of Argentina arrives in Barbados on an official visit 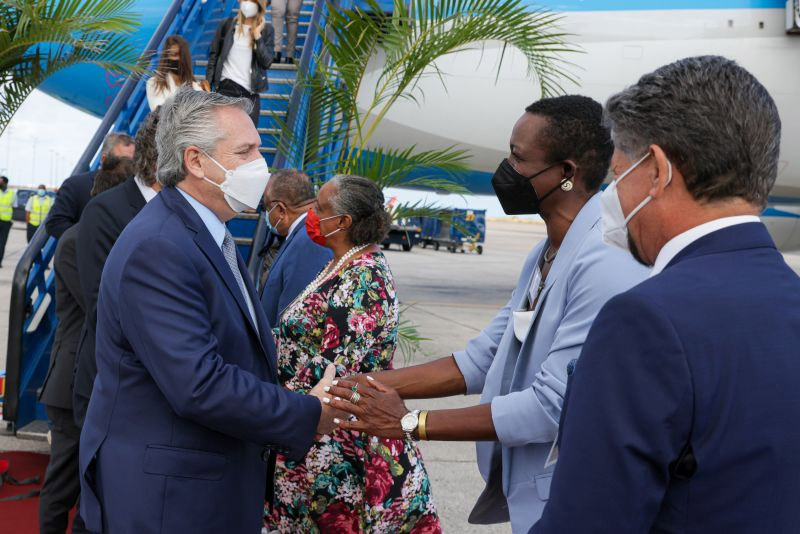 President of Argentina arrives in Barbados on an official visit

The president, who will meet with Prime Minister Mia Mottley tomorrow, landed with his entourage at Grantley Adams International Airport, located in Seawell, 12 kilometers from Bridgetown, where he was received by the Minister of Foreign Affairs and International Trade, Jerome Walcott.

Also by the permanent secretary of that portfolio, Simone Rudder, and the head of Protocol, Resa Layne.

In this, his first visit to Barbados, Fernández will hold several bilateral meetings and will participate in a meeting with representatives of the countries that make up the Organization of Eastern Caribbean States.

He will meet with Mottley tomorrow at the Lloyd Erskine Sandiford Center, in an appointment in which they will review relations and delve into other topics of regional interest.

The agenda will include a tour of the National Botanical Garden, where the head of state will travel to the West Coast Footbridge, during a guided tour, in which the Prime Minister will provide details on the initiatives promoted by this Caribbean nation on prevention of climate change.

Mottley became prime minister in 2018 and was re-elected last month with a landslide victory, making her the first woman to hold that post.

In November of last year, Barbados adopted the form of a Republic, for which it ceased to be part of the British Monarchy and the figure of the Governor General was replaced by that of the President, with a mandate that lasts four years.