Colloquium Nicolás Guillén invites to dialogue on race and nation 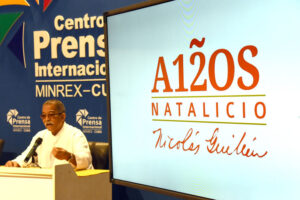 Colloquium Nicolás Guillén invites to dialogue on race and nation

The event conceived within the framework of the commemoration of the 120th anniversary of the writer and journalist’s birth, will take place in Camagüey from July 7 to 10, in coordination with the subsidiary of the Foundation that bears his name in that province.

Also dedicated to the half century of the first publication of the text “La Rueda dentada” and “El Diario que a Diario”, the event will evoke Guillén’s trip to Haiti eight decades ago, as well as the presence of the culture of that Caribbean country in his work, the organizers detailed in a press conference.

According to the president of the Foundation, Nicolás Hernández Guillén, in addition to the exchange related to the aforementioned date, the meeting will promote a debate on the relations between race, nation and society in Cuba and other American nations, including the United States, with the Black Lives Matter movement.

Also, the academic director of the entity, Leonardo Sarría, explained the conferences, panel discussions and presentations will deal with the history and current affairs of Haitians and their descendants in the largest of the Antilles, the impact of that country on literature and Latin American art.

The colloquium also proposes an approach to social issues such as poverty, marginality and skin color in the nations of the continent, public policies aimed at eradicating racial discrimination in Cuba and its presence in the world of letters.

In this sense, the call for an essay contest focused on the thought and work of Guillén, the itinerant photographic exhibition I am not a pure man and the presentations of volumes of the Sensemayá publishing label, during the 30th Havana International Book Fair, stand out.

Also noteworthy in the festivities scheduled is the Roots and Traditions Festival, organized by the Las Tunas branch, and the meeting of troubadours singing Guillén, coordinated by singer-songwriter Tony Ávila.

Hernández Guillén also highlighted the actions aimed at reviving interest in the poet’s work in the new generations, for which they will promote an agreement with different faculties of the University of Havana and other houses of higher studies in the country.