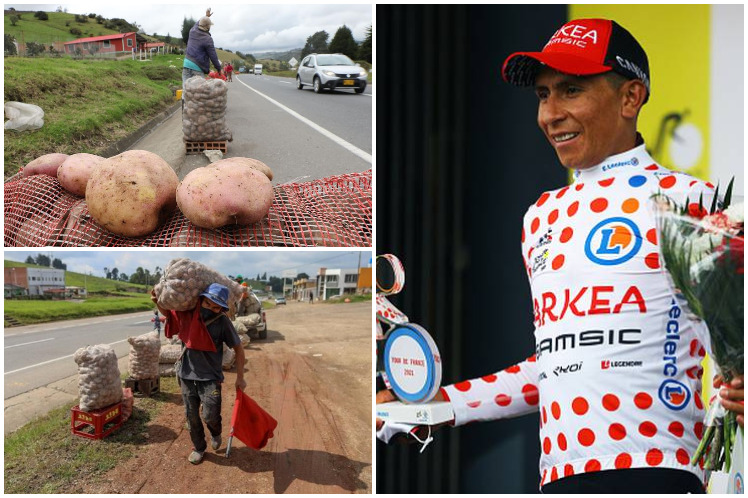 In statements to WRadio, Quintana recalled that he has always been “an ambassador of the countryside, a fighter, an advocate because I continue being a farmer, I continue growing and now not only potatoes but coffee as well”.

He stated that he used to make an advertising campaign to encourage the purchase of Colombian agricultural products to help the farmers, however, now “when we want to buy from the farmers, inputs are going up by 300 percent”.

He explained that the problem in the increase of inputs is that then, those tariffs “are not even invested in the country, there is no return of them”.

He stressed that if a deep investigation is made about where the inputs come from or who is the supplier and about the increase in their prices “they will realize that behind this there is a very serious political issue that is directly affecting the farmers”.

“What is happening? Well, now the farmers are not going to have enough money to buy the inputs and produce potatoes, so the next step is that the Minister of Agriculture is going to import potatoes as they have done many times and that is what we have been against all the time, that they import potatoes from Belgium, Holland and the United States”, he said.

He remarked that with the 300 percent increase in inputs it is impossible to buy the potato or produce it when it is going to arrive much cheaper from Belgium, Holland and the United States.

On the other hand, peasant leader César Pachón and senatorial candidate for the Historic Pact, recalled that a year ago, due to the crisis, the peasants went bankrupt.

Many could not sow again and that is why there is little supply at this time, in addition, inputs rose between 50 to 100 percent, said the politician while blaming the government for causing food insecurity.

“This is how this government works, it does not assist the peasantry, the peasantry goes bankrupt, production drops, supply is less than demand, consumer prices rise and the government makes a decision: to import food,” he emphasized.

Food prices in the last months increased in the country and inflation during 2021 generated an exponential increase in the values of the family food basket.

According to the National Administrative Department of Statistics, inflation in 2021 was 5.62 percent, the highest figure in the last five years, and the most affected sector was food and beverages.

Last January 28, the United Nations Food and Agriculture Organization (FAO), included Colombia, Honduras and Haiti in a list of countries at risk of hunger during 2022; the report states that 7.3 million Colombians will need food assistance this year, and compares this situation with those of Ethiopia, South Sudan, Nigeria and Yemen.