Ethiopia and Kenya to fight terrorism on common border 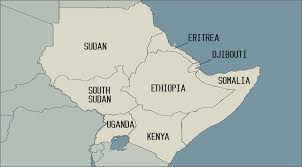 Ethiopia and Kenya to fight terrorism on common border

Addis Ababa, Feb 16 (Prensa Latina) Ethiopia and Kenya will join resources and set strategies against terrorism on the border between the two countries, which they consider the main obstacle existing today to channel economic coop and ensure peace.

This was agreed by the heads of the police forces of the two countries, who have been working for several years to eliminate illegal activities along the border, some 861 kilometers marked by extreme poverty and ethnic violence.

During a meeting in this capital, the general commissioner of the Ethiopian Federal Police, Demelash Gebremichael, and his Kenyan counterpart, Hillary Nzioki Mutyambai, agreed yesterday to increase the effectiveness of the fight against the problems in the area.

To this end, they pointed out, they must improve practices and information exchange processes between institutions, in addition to establishing training, education and capacity building programs as soon as possible.

After discussing several issues of mutual interest, including security in each territory, Gebremichael and Nzioki Mutyambai agreed to sign a memorandum of understanding in the near future, including the convergences and intentions of the parties, in order to undertake a common line of action.

This document will, first of all, certify the planning and execution, in about a month’s time, of a combined maneuver against Al-Shabab and Shene, they declared at a press conference.

Al Shabab has maintained constant hostility against Kenya since 2011, when this country sent military forces to Somalia after several kidnappings in its jurisdiction attributed to this Islamist armed group, an al-Qaeda ally.

Two of the first massacres it perpetrated and received great media coverage were the attacks on the Westgate shopping mall in Nairobi, in 2013, and on the University of Garissa, in 2015, when 147 students died. A faction formed within the Oromo Liberation Front (OLF), although allegedly operating autonomously since 2018, Shene is accused of massacres of civilians, sabotage and destruction of property and infrastructure, among many other crimes.

Its operations increased precisely after that year, when Prime Minister Abiy Ahmed came to power and urged the OLF to lay down its arms, return to the country and intervene in political life peacefully.

Oromia, a state located in western Ethiopia, is the center of their incursions, mainly in the town of Borena, bordering Kenyan territory.