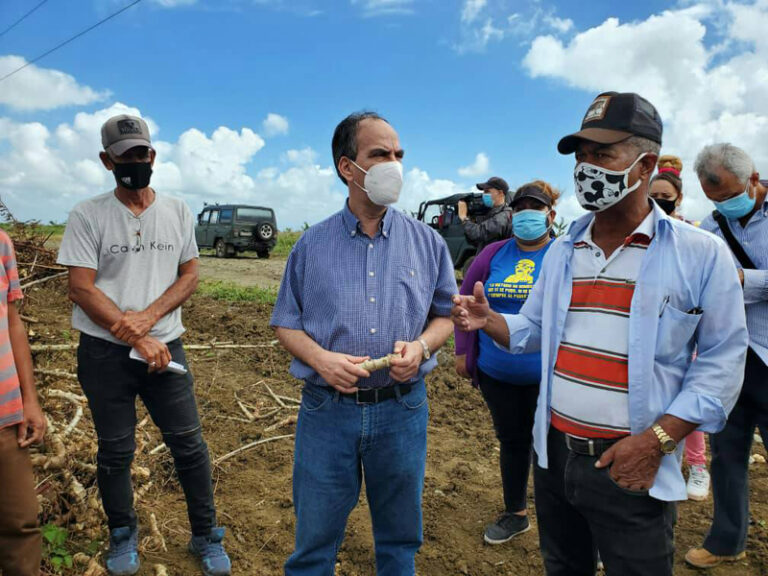 Rogelio Polanco, head of the Ideological Department of the Central Committee of the Communist Party of Cuba (PCC), insisted this is a fundamental line of work for the nation, which starts from the importance of promoting the link to agricultural work and guaranteeing food for the population.

During a visit to productive areas of Mayari municipality, to the east of the provincial capital, the party leader spoke with workers from the Nipe base business unit, where he inquired about the salary earned by each one, as well as the initiatives to reach higher productive levels.

The entity, with some 273 hectares under irrigation dedicated to various crops, recently had new organizational forms that give each area greater autonomy for decision-making in accordance with the interests, capacities and needs of those who work there.

In this sense, Polanco reiterated as essential the participation of all workers in the plans of this agricultural business unit, as well as in the implementation of government measures aimed at stimulating the sector.

The member of the Secretariat of the Central Committee of the PCC highlighted the potential of this pole to be one of those that contributes the most food to the territory based on the quality of its lands and the benefits of the east-west transfer, a hydraulic work that brings water closer to dry areas through kilometers of tunnels and canals.

Similarly, he highlighted the urgency of putting science and technology into agricultural work as well as ensuring peasants’ access to machetes, files and other work tools.

Starting this Tuesday, in the province of Holguín, a comprehensive visit by the Central Committee Secretariat of the PCC and its structure began, with a view to an analysis, with feet on the ground, of the transformations in the economic and social spheres under the provisions of the 8th Congress of that political organization.

During this day, the delegation also visited areas of the municipalities of Urbano Noris, Holguín, Sagua de Tánamo and Banes.