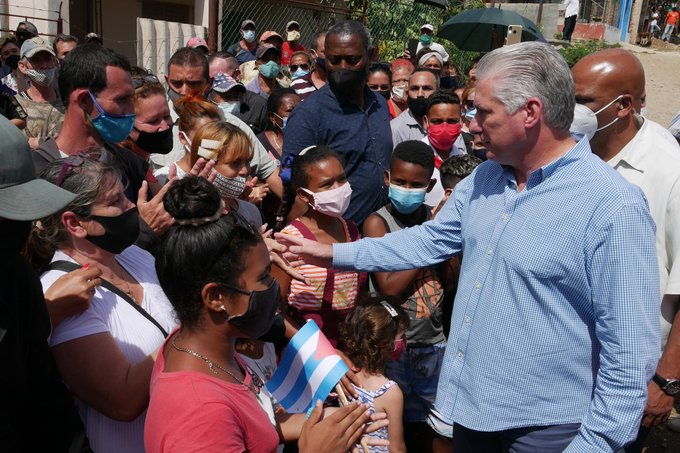 According to the Twitter account of the Presidency, the president also toured the Ismaelillo nursery school, a new location for the Family Care System, the Enrique Caballero Hernández primary school and two medical offices.

“As he passed, he received the usual affection of Holguin residents, who maintain a special relationship with President @DiazCanelB, who was provincial Secretary of the Party here for several years,” the official source reported.

According to the publication, the president also spoke with several mothers who are waiting for a solution to their housing problems.

As part of their tour, Díaz-Canel and the Secretary of Organization of the Central Committee of the PCC, Roberto Morales Ojeda, exchanged with young students from the Universities of Medical Sciences and the House of Higher Studies of Holguín.

Previously, the president stressed at a balance meeting of the Communist Party in the municipality of Holguín that the Revolution maintained its humanist vocation and put the life of its people ahead in the most difficult times.

He pointed out that despite the economic situation, the government has tried to affect the population as little as possible and called on leaders and producers to seek alternatives to the shortages.

According to reports from the local press, the president described a context marked by the intensification of the US blockade, the incidence of Covid-19, the attempted soft coup and the media manipulation against the island.

The Central Committee of the PCC and its auxiliary structure began on the 15th a comprehensive evaluation of compliance with the agreements of the 8th. Congress of the organization in the province of Holguín, which will extend until tomorrow, Friday, and includes tours of economic and social centers at urban and rural locations.