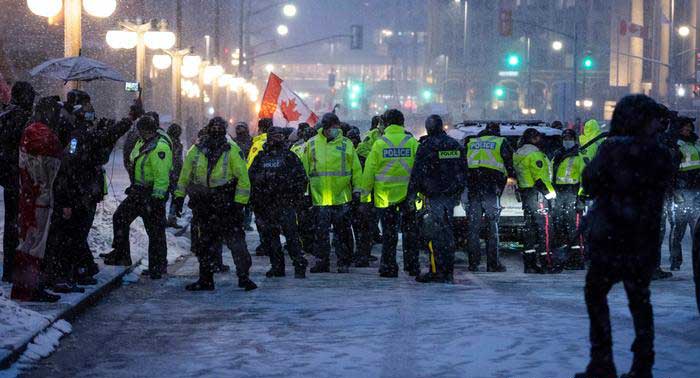 The protests and blockades began some weeks ago broke out after the government passed a law requiring vaccination of truckers that cross the US border, threatening the livelihood of the unvaccinated truckers.

This week, Prime Minister Justin Trudeau declared a national law and public emergency, the first declaration of its kind in half a century, to put an end to the protests.

The emergency expanded the police measures across the country and targeted both protesters’ fundraising, which is considered criminal activity, and protesters’ personal and business bank accounts.

According to Dagny Pawlak, spokesperson of the demonstrators, the arrests of truckers and activists is an “absolutely baseless action and a disgrace for any liberal democracy, although it is not a surprise”.

The authorities said that the blockade of the streets, although in a peaceful manner, was illegal, threatening the demonstrators with arrest, confiscation of their vehicles and other sanctions.

So far, physical violence was rare as Tredeau repeated his call for these illegal and dangerous activities to cease, including in Ottawa, he said.

Truckers´ relatives and other supporters of their demands are present with their minor children but authorities said anyone who incurred the action of taking a minor to an illegal protest could be fined up to 5000 Canadian dollars “and/or potentially spend up to five years in prison”.