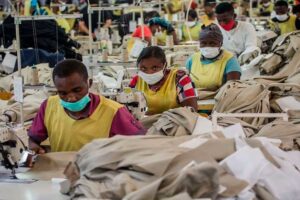 The Government Office confirmed this Monday on Twitter the wage adjustments for all economic activities, and indicated that it will soon be published in the official newspaper Le Monitor.

The government proposal, which increased by 37 percent the wages of textile workers, is less than half of what the union, which staged intense days of mobilizations, is demanding.

The protests were repressed by the police, who used tear gas and shots in the air, resulting in at least 13 people injured, among them a pregnant woman.

Union leaders announced that they will not accept less than 1,500, while denouncing the high cost of living, and pointing out that the factories for which they work produce duty-free garments for brands such as Gap, Old Navy, H&M, JC Penney and Zara.

These pieces are then sold by U.S. and Canadian retailers, and the workers are paid a “pittance,” they deplored.

The union claims that current wages barely allow them to afford two meals a day of 250 gourdes (about $2.45), and with that amount it is impossible to support their families.

The workers’ petition takes place in the midst of a political, economic and security crisis, and while about 45 percent of the citizens live on the poverty line.

The figures soared after the August 14 earthquake that caused more than 2,200 deaths and left nearly one million people in need of humanitarian assistance.

Prime Minister Ariel Henry admitted the need to adjust salaries, and acknowledged that fees must take into account the reality of the cost of living and social dynamics in the industrial and commercial sector.

More thousands Haitians deported from Dom. Rep. in one week

More thousands Haitians deported from Dom. Rep. in one week