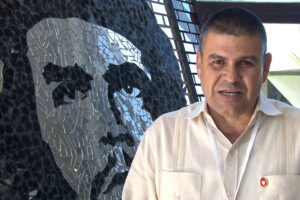 We maintain close ties with the South African Health Workers Union, as well as with Unison, the second largest labor organization in the United Kingdom, with nearly 1.3 million members, Badia told Prensa Latina.

As a member of Clate, an international trade union organization that brings together state workers from Latin America and the Caribbean, we communicate constantly, and every three months we exchange information on several topics of interest for the region, he added.

We have taken steps forward with sister federations in Canada, interested in learning the truth about Cuba, he pointed out.

Badia described as excellent the relations with the US National Union of Nurses, whose members have visited Cuba and have received courses at the National School of Public Health, in this capital.

According to the workers leader, a representative of the French Health Union recently praised Cuba for having three homegrown vaccines and two vaccine candidates to fight Covid-19, in spite of being a developing country.

Referring to the brotherhood with other nations to fight Covid-19, Badia pointed out that Cuba is unique, and continues being in solidarity with its people and with the world.

On the occasion of the 50th anniversary of the National Union of Health Workers on Wednesday, its top representative extended his congratulations to members and non-members, and called on them to build a better world, because it is possible, he affirmed.