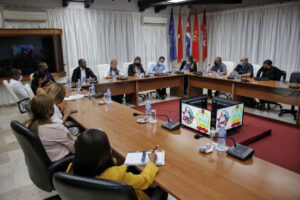 The first secretary of the UJC National Committee, Aylin Alvarez, explained to the visitors the role of the members of that organization in high-impact tasks during the Covid-19 pandemic and their participation in the country’s economic and social strategies.

Likewise, she expressed that young people participate in important decision-making processes, as well as in the construction of public policies in favor of citizens, under the leadership of the Communist Party of Cuba (PCC) and the UJC.

She added that youths have practically become Cuba’s mainstay in terms of the economy, public health and other strategic sectors, the Cuban News Agency (ACN) reported.

For his part, the first secretary of the Youth of the Popular Liberation Movement of Angola (Jmpla), Crispiniano Dos Santos, expressed gratitude for the meetings and for learning about the functioning and particularities of the UJC and its links with the PCC.

He explained that the participation of young people from his country in productive activities such as fishing, agriculture and entrepreneurship was fundamental to survive the current economic crisis, aggravated by the fall in oil prices, Angola’s main resource.

At the meeting, Dos Santos conveyed a fraternal message to Cuba from Angolan President João Lourenço.

Jmpla Central Committee member Justino Capapinha called for increased collaboration between the two States, given Cuba’s results in the production of drugs against Covid-19.

Capapinha said that closer bilateral relations will make it possible to carry out scientific work and projects in favor of both societies.

During the meeting it was revealed that both the UJC and the Jmpla will celebrate their 60th anniversary this year and both will use international debate as platforms for the discussion of related problems.

The Angolan delegation also visited institutions such as the University of Havana and the Center for Genetic Engineering and Biotechnology (CIGB) in the Cuban capital.