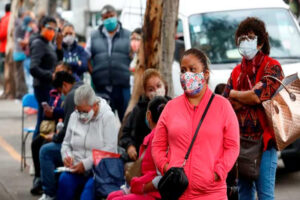 It adds that 62,404 people had signs and symptoms of the disease in the last 14 days, and it explained that these are considered active cases and are equivalent to 1,1% of the total during the pandemic.

The national hospital occupancy rate, according to the report, is 83% lower than the recorded at the peak of the second epidemic wave in January 2021. In the last 24 hours, it explains, the occupancy of general beds decreased by two percentage points to 23%, and the beds with mechanical ventilators decreased by one percentage point to 16%.

On the other hand, it reported that the registration to receive the Covid-19 vaccine for teenagers between 12 and 14 years of age with cormobidities and people over 15 years of age who could not be immunized at that time is still open.

Also for the application of booster vaccine doses to those who are over 18 years and have completed four months of the scheme. It added that 178,641,032 vaccine doses have been administrated since December 24, 2020, including the 510,649 doses administrated yesterday.