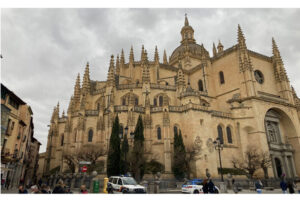 We are majestically welcomed by the 167 arches of the spectacular Roman Empire aqueduct, an entrance that makes the visit more attractive.

Built with huge stone blocks mounted one on top of the other, without mortar, reveals the skills of constructors in the early 2nd century AD.

The work apparently goes back to the end of the government of Emperor Trajan and the early times of Adrian. It carries the waters of the Fuenfria spring in an over 15 kilometer journey before reaching the small city with almost52 000 inhabitants.

The rocks are granite blocks, each one with a hole that allowed it to be carried due to its considerable weight. Legend has it that the city was founded by Hercules, but in reality it has two very important chapters.

A World Heritage Site since 1985, it stands out by the so called Dame of Spain’s Cathedrals, a Gothic jewel with some renaissance touches from the 16th and 18th centuries.

Segovia’s Alcazar, the royal palace on the top of a rock between the Eresma and Clamores Rivers stands out as another exquisite site in the city. It was built in the 12th century and considered one of the world’s most authentic medieval castles, plus its multifaceted functions throughout history: a fortress, state prison and Roman castrum.

Some say that the facility inspired Walt Disney to draw that of Cinderella.

By the way, a sculpture of Antonio Machado at the Plaza Mayor includes a poem with the phrase: “It is true that the water of the Eresma is licking our hearts… Towers of Segovia, storks in the sun!”

Another not lesser detail can be found very close, a plaque that reads the following: “on December 13, 1474, at the atrium of the Iglesia de San Miguel church, the city of Segovia proclaimed Isabella, the Catholic, as Queen of Castile.”

Cobblestone streets, colorful alleyways with their medieval houses, along with the Casa de los Picos, the Alhondiga, the Torreon de Lozoya and the Iglesia de San Martin church complement beforehand one of Spain’s most pleasant sites to enjoy a Sunday day.