The sacred mountain of Korea 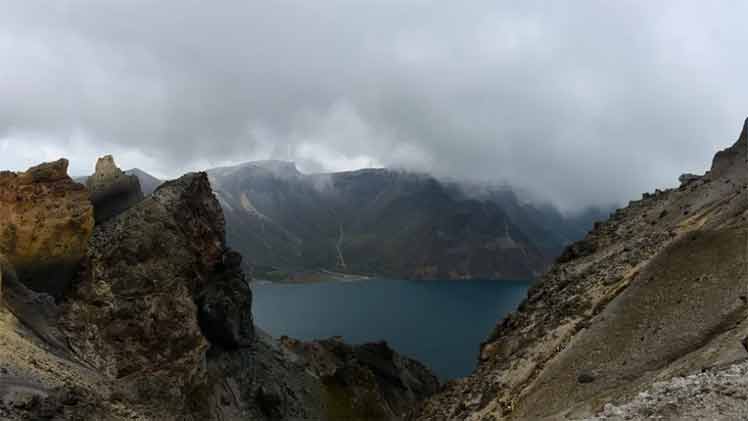 The sacred mountain of Korea

As it’s located between the two Asian nations, its name in Chinese is Chanbai-shan (Great White Mountain) and, in Korean, Paektusan (White Head Mountain).

The mount is a strato volcano whose cone is cut off by a wide boiling crater, five kilometers wide and 850 meters deep, partially, that occupy the waters of Lake Tianchi (from the sky).

Such much water emerged after the volcano’s latest eruption in 1903;it has a 12-to-14 kilometer radius and an average and maximum depth of 213 and 384 meters, respectively.

It’s generally covered by ice from mid-October to mid-June.

The mountain’s central area grows some three millimeters every year due to the rising levels of magma under that area, and 16 peaks surpass 2,500 meters in height in the boiling crater.

Water springs up from the lake in the north, and close to it there is a 70-meter high fall.

The Songhua, Tumen and Yalu Rivers are born in the mount. These last two make up the triple border among the DPRK, Russia and China.

Flora and fauna are very rich in the region; five plant species have been identified in Lake Tianchi and some 186 on its banks. On the summit’s Chinese side, the forest is very old and has hardly gone through any change or being overused by human beings.

Birch and pine trees, mixed with other species, prevail there. Meanwhile, the Korean side has gone through long-term overexploitation.

The area is known as a habitat for tigers, Amur tigers, wolves and wild bears.

The Siberian roebuck can also be found in the highest sections. Birds include the common black grouse, owls and woodpeckers.

Koreans and Manchurians say that the Paektu is the site where their ancestral origin is, and was the birthplace of Dangun, the founder of Gojoseon, the first Korean Kingdom (from 2 333 BC to 188 AD).

More recently, according to historical records, DPRK’s leader Kim Jong Il was born in a secret camp established by his father, Kim Il Sung, on the mountain slopes, in 1942, during the war against the Japanese occupation.

The mountain is so important than in 2018 the leaders of the nations on the peninsula, Moon Jae In (from the south) and Kim Jong Un (from the DPRK) climbed it as a sign of approach between the two countries.

Moscow and Seoul to resume negotiations on Korean peninsula

Kim pays tribute to Chinese martyrs who fought in Korea

Moscow and Seoul to resume negotiations on Korean peninsula

Kim pays tribute to Chinese martyrs who fought in Korea