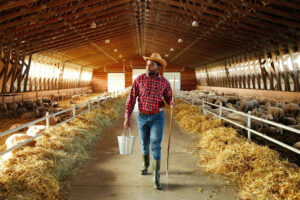 Washington.- The question in the title hangs in the air. Black farmers in the United States went down from more than one million to fewer than 50,000 over the last century amid industry consolidation, burdensome lending conditions and racism, according to official data.

Not a few thought the $1.9 trillion relief package approved by President Joe Biden would be the solution they were waiting for in order to get their lives back on track, as the bill included $4 billion in debt write-off for them and other “socially disadvantaged” people who withstand decades of discrimination by banks and the federal government.

But the problem lies there. After much paperwork and efforts to benefit, many farmers received notices that the government intended to “speed up” the foreclosure of their properties.

Biden’s initiative is hindered by demands from white farmers and groups representing them, which question whether race-based debt relief can be offered.

The president’s program would help some 15,000 farmers and cattlemen and women who suffer from racial or ethnic bias, including those who are black, Native and Asian Americans, Alaskan Natives, Pacific Islanders and Hispanics.

However, for the more than 2,000 minorities receiving private loans guaranteed by the Department of Agriculture and unprotected by a federal deferral, foreclosure remains latent, which will lead to a progressive decrease in the number of landowners from this discriminated community.

This is added to recent polls indicating that the Democratic Party is not doing well in rural areas, where most voters have an unfavorable opinion with a view to next November mid-term elections.

Such a situation is not surprising, since in recent decades the vote favored Republicans, although still black farmers across the country back the blues.

Rural voters are mostly made up of white working-class people who are pro-police, pro-Christian values and pro-US-Mexico border security, and when Donald Trump, Biden’s predecessor, won the presidency he got their support.

Only 23 percent of rural voters think Democrats care more about their community than Republicans.