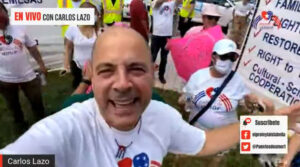 US caravans call for the end of blockade against Cuba

On Facebook, Bridges of Love project coordinator Carlos Lazo showed his followers that he gathered to call for the lifting of the US blockade before taking to a great number of Miami streets, bearing Cuban flags and posters reading ¨End the blockade, No More Blockade, and Milk Yes, Blockade No¨

Bridges of Love project, along with Code Pink, has already shipped powdered milk to Cuba, but unfortunately due to the economic and financial restrictions imposed by the US blockade Cuba is currently facing up problems in purchasing powdered milk on the international market.

According to Medea Benjamin, Code Pink co-founder, at this time as wars increase, it´s more important than ever to show love and friendship between peoples like Cuba and the United States.

Several participants called for the more than 240 sanctions against Cuba imposed by former President Donald Trump and that have been kept unchanged by the Joe Biden administration to be lifted.

More and more people in Miami join solidarity caravans calling for the end of unilateral coercive measures on Cuba. The time for hate is over and the time for love has just begun, Mr. Lazo posted on Facebook.

We want Bridges of Love, several participants claimed, while calling for the end of sanctions against Cuba.

Reopening consular services at the US embassy in Havana in order to promote visas granting and family reunification programs were others of caravanists’ demands.