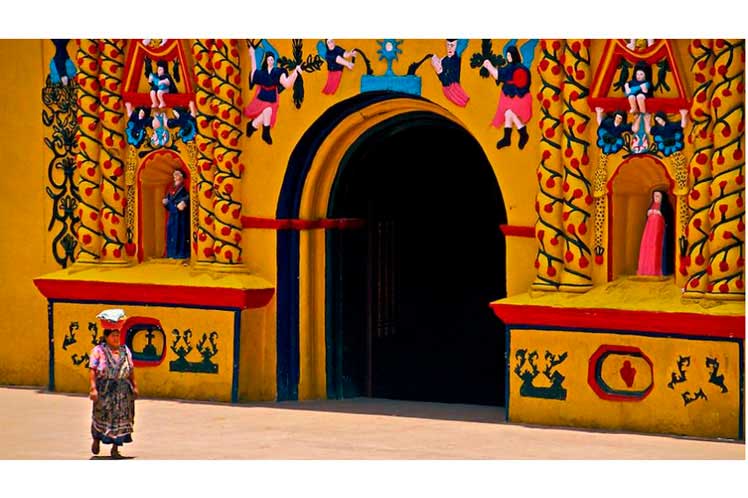 The church is a unique architectural building in Guatemala.

With an intense yellow background, the shade means food in Mayan culture, because it’s the color of corn. Red also prevails, indicating that it is the color of sunrise and of sacrifices of ancestors in conquest times.

For many, it’s designed inspired by the local “huipil”, a traditional Central American indigenous female outfit.

Until here, few would recognize its peculiar charm; however, the number of perfectly mixed decorations and effigies makes it impossible for the curious visitor not to take a look, wondering how 200 figures were inserted in such a reduced space.

They make reference to Mayan roots and the religious legacy that left later in natural and ecclesiastical representations, with two tigers on top of the central hall.

Another important detail is that painted angels wear boots or socks, and high up you can see some figures looking at the sky, as if they were expecting the November winds, a month in which festivities of the municipality’s Patron Saint,San Andres Apostol (Apostle Saint Andrew), are celebrated.

The façade’s flashy shades extend to the dome above the main altar, the first thing that you can watch from the road connecting it to the central plaza, since the religious building is located with its back turned to the main entrance, another characteristic feature.

The dome is also very unique, with stripes of different colors, simulating a Mayan ball.

According to spoken tradition, the church was left without a priest for many years, which is why people decided to continue putting the finishing touches according to their taste, culture and habits.

As far as history is concerned, there is no exact data about its construction, but it’s believed to have been built in the mid-17th century. It is located in the municipality’s east, an area where the sun rises, and is one of the destinations most frequently visited by national and foreign tourists.