Russia and Ukraine find points of contact to move forward 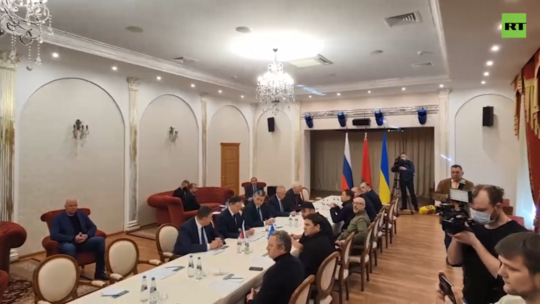 Russia and Ukraine find points of contact to move forward

The member of the Moscow delegation at the dialogue explained to Russia 24 television that the Ukrainian representation was willing to listen and participate in a detailed discussion on the essence of the agenda items.

After the five-hour exchange, the leadership of both delegations will share information with the presidents of their respective countries on the progress of the negotiations before the next meeting, said Kremlin adviser Vladimir Medinski, who heads the Russian negotiating team.

The parties identified priority issues on which some decisions were outlined and at the moment they are going to their capitals for consultations, confirmed the adviser to the head of the Ukrainian Presidential Office, Mikhail Podoliak.

The high-ranking Ukrainian official described the negotiations as difficult, but pointed out that they were carried out “without final agreements”.

Podoliak wrote on his Twitter account that “the Russian side, unfortunately, still has a non-objective view of the destructive processes it launched.”

The representatives of Moscow and Kiev had the issues of the ceasefire in Ukraine and hostilities as a priority for the dialogue. In addition, they agreed on the need to hold a second round of negotiations in the near future after consultations with their respective leaderships.

Russian President Vladimir Putin, in a televised speech to report on the start of the operation, stated that the goal is to protect the population of Donbass from abuses and genocide by Kiev over the past eight years and to “demilitarize” Ukraine.