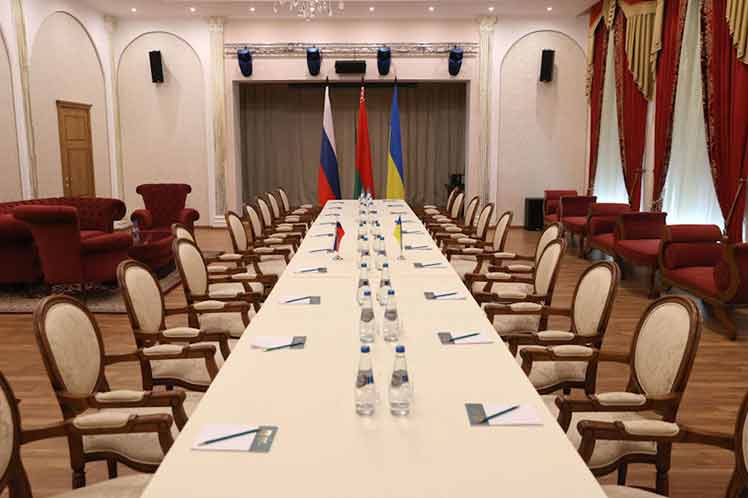 The Moscow delegation is headed by Russian President´s advisor Vladimir Medinski, and also includes Deputy Ministers of Defense and Foreign Affairs, Andrei Rudenko and Alexander Fomin, as well as the head of the State Duma committee for international affairs, Leonid Slutski

Meanwhile, Kiev’s representation includes Defense Minister Alexei Reznikov, advisor to the head of the Presidential Office Mikhail Podoliak, and the head of the parliamentary faction of the ruling People’s Servant party, David Arajamia.

Arajamia said today that in the talks, Ukraine has to listen and calmly weigh Moscow´s proposals, taking into the account their impact in the country and its citizens.

Russia launched a military operation last February 24 in the Ukrainian Donbass autonomous region, after that the authorities of the self-proclaimed Donetsk and Luhansk People´s Republics asked for help to repel Kiev´s agression.

Earlier, Moscow recognized the independence and sovereignty of both territories and signed friendship, cooperation and mutual assistance treaties with these leaders, which included the establishment of diplomatic relations and military aid.

Russian President Vladimir Putin, in a televised speech, stated that the operation´s objective is to protect the Donbass´s population from the abuses and genocide by kiev over the past eight years and to “demilitarize” Ukraine.

According to the Russian Defense Ministry, the attacks are aimed at military infrastructures, air defense facilities, airfields and the military aircraft. It stressed that Ukrainian civilian population is not threatened.

The Ukrainian Government broke diplomatic relations with Moscow, decreed martial law in the country, demanded financial and humanitarian aid from the international community, while demanding sanctions and “isolating Russia by all means and formats”. Putin stated that Russia does not plan to occupy Ukrainian territories, but to defend the right of the Ukrainian peoples to self-determination.

He also reiterated that Moscow cannot allow Kiev to acquire nuclear weapons and further militarize itself, which is a danger to the country’s security. He stressed that NATO’s continued eastward expansion is unacceptable.

The clashes have resulted in the destruction of more than a thousand Ukrainian military facilities, as well as deaths and injuries, although the true extent of the number of casualties on both sides is not known so far.