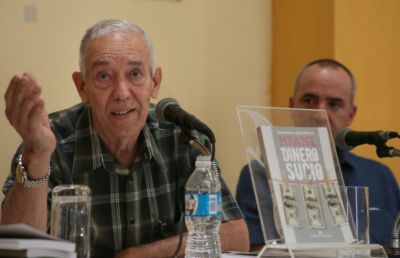 This is what the author, Hedelberto Lopez Blanch, assures, and in his text dismantles the propaganda coined by powerful U.S. media that Cuban emigrants made their way on their own and that more than one became a millionaire due to the benefits of the system.

In conversation with Prensa Latina, Blanch said that the book, now reedited and published by Nuevo Milenio publishing house, is the result of exhaustive research carried out in the United States.

Miami Dinero Sucio (Dirty Money) is based on consultations with individuals, archives in libraries, universities, media outlets and in the Civil and Criminal Courts of that Florida city, where I identified the true roots of many of those fortunes that emerged practically out of nowhere, he said.

The book uncovers corruption, drug trafficking, appointment of lawyers under pressure, bribes to journalists, he added.

Also, manipulation of elections, money laundering in the so-called Greater Miami, fraudulent millionaire contracts with the county government, political and administrative perks, millionaire embezzlements to federal and state organizations, as well as abuses of power.

According to the author, all this makes Miami one of the most corrupt cities in the United States.

Lopez Blanch affirms that the control of the Cuban-American mafia extended to Washington and today dominates the White House policy towards Cuba, to increase its benefits and tighten the economic, financial and commercial blockade against the island. The book edition has a prologue by the Hero of the Republic of Cuba, Gerardo Hernandez, who was infiltrated in the Miami counterrevolutionary organizations and knows first hand about their actions.

Biden bends to Miami in his policy on Cuba

Biden bends to Miami in his policy on Cuba