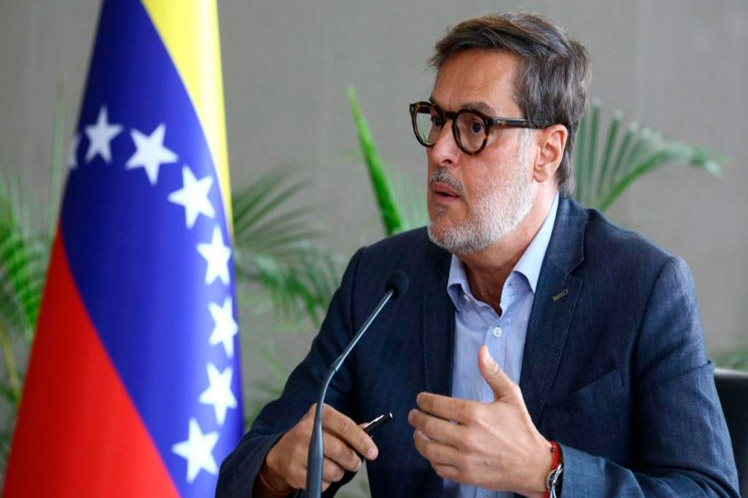 Ukrainian Government disregarded provisions of such agreements, which guaranteed peace, stability and a way to understanding between neighboring states and Russia, the Venezuelan foreign minister told the Sputnik news agency, while emphasizing that Venezuela urged for diplomacy as a route towards the search for stability and peace between both nations.

Mr. Plasencia supported the right of Moscow to defend itself from threats from the North Atlantic Treaty Organization (NATO), assuring it is subjecting the world to a worrying and terrible situation.

“We´re constantly being bombarded by a warmongering, threatening discourse from Brussels -NATO headquarters- Washington and from Kyiv, opposing regional and global stability, and irresponsibly and even childishly ignoring Russia’s right to preserve its peace,” he stressed.

The Venezuelan diplomat, in his statements to Sputnik, condemned NATO’s actions on Russia, which he described as irresponsible and criticized the threats on Moscow.

The Venezuelan foreign minister stressed that, while his country is committed to the principle of diplomacy as an avenue to solve any disagreement, NATO’s constant threat to Russia is inadmissible.

“We must insist on what we have said from the very beginning, diplomacy must be the way to solve these disagreement situations. What must not be allowed is NATO’s constant efforts to threaten the Russian Federation,” he added.

President Nicolás Maduro, on the other hand, posted on Twitter that he had a phone talk with his Russian counterpart Vladimir Putin, ratifying Venezuela’s condemnation of NATO’s destabilizing actions and reiterating the firm disposition in favor of understanding and dialogue, as a way to preserve peace.

Russia is satisfied with negotiations in Istanbul, Lavrov states