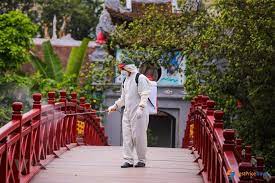 With this number, Vietnam displaced the Philippines as the country with the second highest number of infected people in Southeast Asia; it is only surpassed by Indonesia (5,630,096).

It should be noted, however, that Indonesia has more than 278 million inhabitants and Vietnam 98 million.

Until the end of April last year, Vietnam was one of the countries that was coping best with the disease worldwide (3,428 cases, 35 deaths), but first the irruption of the Delta strain of SARS-CoV-2, and for the last two months the Omicron, have dulled its statistics.

The epidemiological situation is also worrying in Hanoi, which has been reporting almost daily peaks since the beginning of the year. This Wednesday the figure, again unprecedented, was 15,114, more than a tenth of the total.

The Ministry of Health also reported 114 deaths today, bringing the total to 40,452. Some 3,700 patients are clinically compromised.