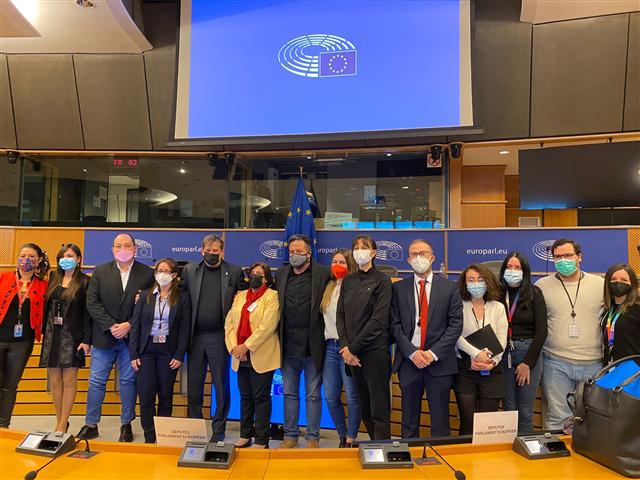 In one of the meetings of the day, Santana and Vice President of the European Parliament Dimitrios Papadimoulis agreed on the importance of promoting parliamentary relations on the basis of Political Dialogue and Cooperation Agreement between Cuba and the European Union (EU).

In another exchange of criteria, she addressed, in addition to Cuba’s progress, the common challenges with the EU in terms of gender equality with Robert Biedron, president of the Commission on Women’s Rights and Gender Equality of the European Parliament.

The Polish EPM described Cuba as an example in the issue of women’s rights.

The president of the Commission for Attention to Children, Youth and Equal Rights for Women of the Cuban National Assembly also spoke in this capital about the reality of the largest of the Antilles with Tilly Metz, who heads the Delegation of the European Parliament for Relations with Central America.

Santana presented today to EPMs who are members of the Group of Friendship and Solidarity with Cuba details about the project of the new Family Code, which the inhabitants of the island are debating these days.

During the meeting, the group’s president, Javier Moreno, recognized Cuba’s progress in terms of equality and non-discrimination.

Regarding the aforementioned Family Code, he welcomed the process of popular debate and search for consensus, and proposed circulating in the European Parliament the final text approved in the referendum planned after the ongoing consultation.

EPM Elena Kountoura also praised the results of the Caribbean country in the empowerment of women and the leading contribution of Cuban women in the scientific field, ratified during the Covid-19 pandemic.

Member of the friendship group, Manu Pineda, its vice president, and Fernando Barrena also participated in the meeting with congresswoman Santana, who pointed out the importance of systematizing exchanges of this type, with a constructive agenda of matters of common interest.

Europe can learn a lot from Cuba, they concluded.