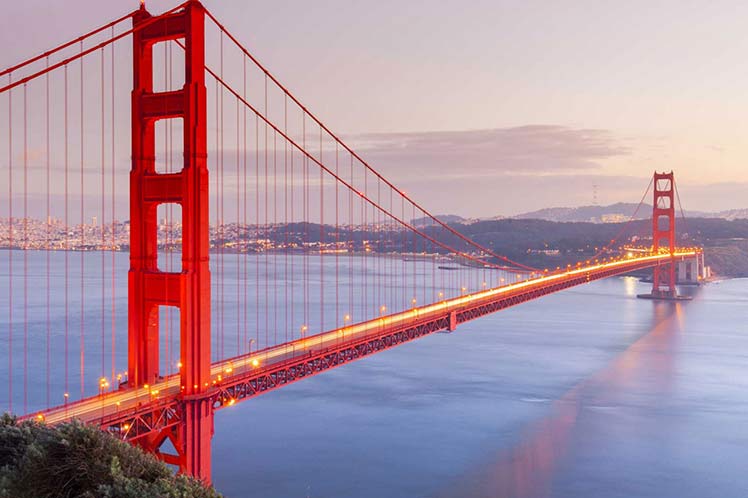 Considered one of the wonders of the modern era, the infrastructure joins other icons of that American city, such as the Painted Ladies, the crooked Lombard Street and the cheerful sea lions in the Fisherman’s Wharf neighborhood.

Its image appears in scenes of well-known movies. It was devoured by a shark (Mega Shark vs. Giant Octopus), telekinetically moved by Magneto (X-Men); saw three black hawks emerge (The Rock); bore the weight of James Bond in the skin of Roger Moore, and even Superman arrived in time to save a school bus.

Dirty Harry (1971), Vertigo (1958) and The Maltese Falcon (1941) include other memorable sequences on the bridge, whose construction lasted between 1933 and 1937, and -according to historical data- 11 workers lost their lives in the process.

Its approximate length is 1,280 meters in the suspension part, which is suspended from two towers 227 meters high and has six lanes, three in each direction, as well as special paths for bicycles and pedestrians.

The name Golden Gate was taken from the explorer John Fremont, who many years earlier, in 1846, named the strait that separates the bay from the Pacific.

It is said that the orange color blends in with the natural environment of the nearby hills and creates a contrast with the color of the sky and the ocean, making it visible even on foggy days.

In addition, the paint protects the structure from the salt in the air, which oxidizes and corrodes the steel.

While the site is associated with beauty, it also marks the history of suicide in the United States, as it is estimated that more than 1,000 people have jumped into the water from there, so along the bridge they installed the so-called phones of hope, with access to helplines.

At the same time, many Americans long to throw the ashes of their loved ones in the emblematic place, but throwing any other object is considered a misdemeanor, according to the California Penal Code.