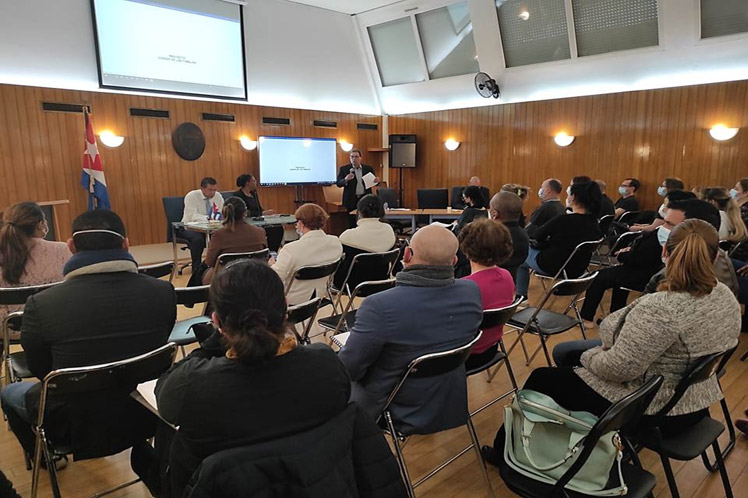 Paris, Mar 9 (Prensa Latina) Cubans on an official mission in France participated on Wednesday in a debate on the draft Family Code, an initiative they celebrated for its contribution to diversity and social inclusion.

At the Cuban Embassy in this capital, some fifty diplomats, officials, workers and their families were present at the meeting, as part of consultations launched in Cuba to enrich a text that will be submitted to a popular referendum.

During the debates, 15 approaches were made, with proposals to add or delete content, as well as the presentation of doubts.

Marriage and de facto affective union, the protection of children in the digital environment and beyond the family environment, the care of the elderly, the duties and rights of the spouses and solidarity pregnancy were among the topics that motivated the interventions.

At the end of the debate, Cuban Ambassador to France Otto Vaillant highlighted the participation in the consultation on the Family Code, which he considered a standard for the future, due to its inclusiveness and its modern character.

He called to read the draft Family Code several times before the popular referendum that will follow the process of ongoing discussions in Cuba and abroad.

The draft Family Code was approved by the National People’s Power Assembly (Parliament) in December 2021, with a consensus in Cuban society about its contribution, if materialized, to the protection of all expressions of family diversity and the right of each person to form a family on the basis of the principles of equality, non-discrimination and human dignity.

The text strengthens family responsibility from the emotional, educational, training and economic point of view in the care of its members; with love, affection, solidarity and responsibility at the highest of values.