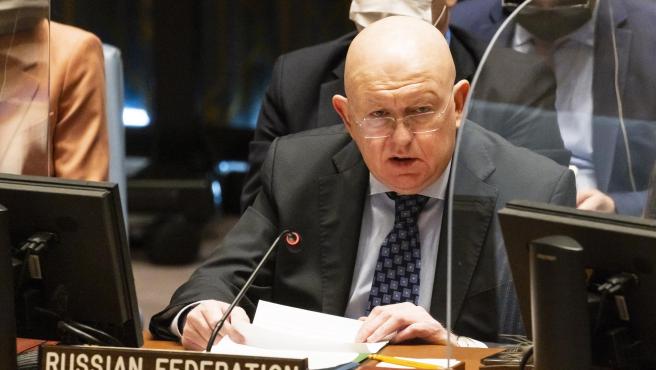 Moscow’s permanent representative to the United Nations, Vasili Nebenzia, pointed out that it was recently discovered on Ukrainian territory how the remains of such a program were cleaned up.

According to him, the Russian Defense Ministry has material indicating that many of the biological experiments were carried out by US personnel with diplomatic immunity.

In addition, he added, such actions were carried out within the framework of a military biological program, according to data collected on the ground.

At the moment they are liquidating all the tests in Ukraine and destroying the pathogens, reported Nebenzia and warned of the high risk that the spread of these agents represents.

Biological threats know no borders and the United States has hundreds of biological laboratories throughout the world while continuing to refuse to submit them to a verification system: what are they hiding?, the Russian diplomat questioned.

The West will say that the information provided today is false, but the risk of the spread of pathogens is still present and very real, he insisted.

The Covid-19 pandemic shows how vulnerable humanity is to biological threats, and there are also reports from international entities about the existence of highly communicable diseases in Ukraine, he noted.

Nebenzia explained how this Eastern European country has a geographical location that places it at the center of the migratory routes of numerous birds and precisely, the project implemented by the United States in Ukrainian territory studied the transfer of pathogens through wild birds.

All these tests were carried out in a network of at least 30 biological laboratories distributed throughout Ukraine with the support of various US entities, he emphasized.

The material presented to the Security Council is also available on the website of the Russian Defense Ministry, Nebenzia reported.

For its part, the United States representative to the United Nations denied Moscow’s accusations and pointed out that the cooperation they have established with Ukraine was to support facilities for the study of Covid-19.

Other Western member countries of the Security Council also rejected what Russia presented and supported Washington by claiming these are not biological laboratories, but “health facilities”.

Meanwhile, the United Nations Undersecretary General for Disarmament Affairs, Izumi Nakamitsu, stated that the multilateral organization is not yet aware of the existence or use of biological weapons in Ukraine.

Likewise, she pointed out that there is no international verification mechanism to deal with these allegations.