Venezuela votes for peaceful solution to the Russia-Ukraine conflict 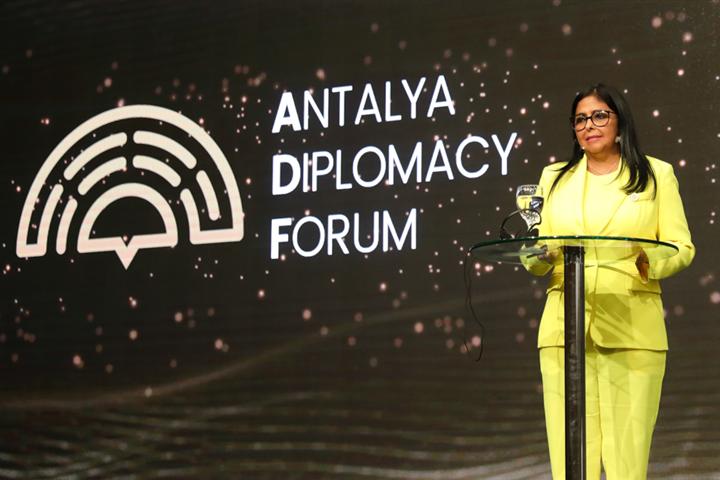 Venezuela votes for peaceful solution to the Russia-Ukraine conflict

Speaking at the second edition of the Diplomatic Forum in Antalya, Turkey, the Venezuelan deputy president emphasized the need to support dialogue initiatives between the belligerent parties to avoid the suffering of the peoples affected by hostilities.

“Venezuela joins the voices that call for a peaceful solution and dialogue in this conflict; avoiding suffering to the peoples of the parties involved is a necessity,” stressed the dignitary in her exhortation to the countries involved in the conflagration to enroll in some sincere and effective negotiations.

In this sense, vice president of Venezuela stressed that the United States, Europe, the North Atlantic Treaty Organization (NATO) and Russia are called to restore balance to alleviate the anguish and suffering that have disrupting effects in the global arena. .

Likewise, Rodríguez advocated the cessation of the models of domination that threaten to extinguish humanity in exchange for guaranteeing hegemonic interests, and also urged the elimination of economic wars through the implementation of unilateral coercive measures, causing collective punishment.

The Venezuelan deputy president denounced that more than 30 countries in the world today suffer the negative consequences of the sanctioning policy of Washington and its Western allies.

In the case of Venezuela, she recalled that in recent years more than 500 punitive actions were issued to set up a blockade against the economy, with a severe impact on the population’s enjoyment of human rights.

Similarly, the executive vice president ratified the Bolivarian government’s willingness to maintain respectful relations with the United States, referring to the recent meeting held in Caracas between an official delegation from the Joe Biden administration and President Nicolás Maduro.

Among other bilateral issues, during the meeting the parties addressed aspects of the energy agenda, in a scenario of marked market instability as a result of the armed conflict and Western sanctions against Russia, explained Rodríguez.

She also underscored Venezuela’s willingness to establish a constructive dialogue in this area with production companies from the United States and the rest of the world.