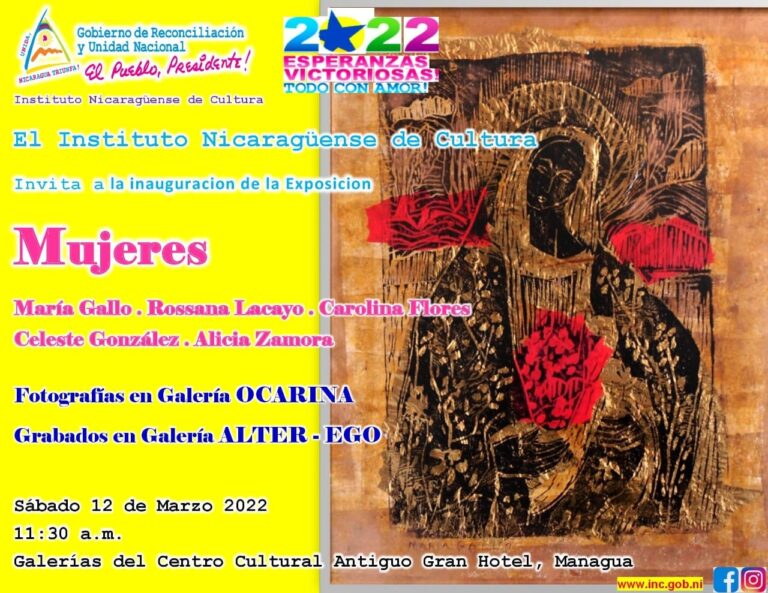 Managua, Mar 14 (Prensa Latina) The galleries of the Antiguo Gran Hotel Cultural Center in this capital city are hosting today an exhibition of engravings of three recognized masters of this technique in Nicaragua: Maria Gallo, Carolina Florez and Alicia Zamora.

The exhibition is part of the tribute to women devoted to the plastic arts and education from different disciplines and methodologies, organized by the Nicaraguan Institute of Culture (INC) and open to the public until April 12.

The exhibition presents works by Gallo, painter, writer and recipient of the Ruben Dario Order of Cultural Independence in 2007, whose strokes symbolize popular styles and reflect her childhood experiences in her grandmother’s house in Leon, an scholars of her collection said.

With a degree in Arts and Literature from the Central American University (UCA), she was one of the founders of the Centros Populares de Cultura, compiler of Nicaraguan customs, especially traditional children’s games, and her first novel, Entre altares y espejos (Between Altars and Mirrors), was published in 1999.

Upon her death, on February 25, 2020, the vice-president of the Central American country, Rosario Murillo, recognized her as an “exemplary woman” and referred to her numerous awards, including the National Drawing Award in 1988 and the National Engraving Award in 1990.

Zamora, another of those included in the INC exhibition, is a visual artist, sociologist and cultural manager, focused as a self-taught creator on the research of the different uses of paper in engraving and drawing techniques, printing from woodcut.