Cuba calls for environmental struggle with a gender perspective 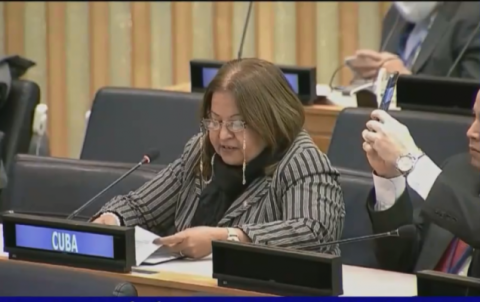 Cuba calls for environmental struggle with a gender perspective

United Nations, March 17 (Prensa Latina) The secretary general of the Federation of Cuban Women (FMC), Teresa Amarelle, denounced today at the United Nations the neoliberal policies that accelerate the destruction of the environment and deepen gender gaps.

In her speech, offered at the Commission on Legal and Social Status of Women, she rejected “the irrational and unsustainable patterns of consumption, which hinder the equitable development of our peoples.”

She also condemned the persistence of discriminatory social and cultural norms, unequal access to land, water and other natural and productive resources, and the limited participation of women in the formulation of policies related to the environment.

On behalf of the Cuban government and people, she called on the international community to adopt urgent measures to achieve development paradigms that integrate the preservation of the environment, justice and gender equality.

She stressed that these issues are a priority on the Caribbean island and proof of this is the Constitution of the Republic, which “promotes the protection and conservation of the environment, confronting climate change and reducing the risk of natural disasters.”

My country, Amarelle said, is advancing in the implementation of its development strategy, including the execution of its Plan to confront climate change, known as the Life Task.

The authorities prioritize the environmental aid despite the unprecedented effects of the economic, commercial and financial blockade imposed by the United States government, even in the midst of a pandemic, she explained.

On the other hand, during her speech, the secretary general highlighted the steps that the island has taken to protect the rights of Cuban women.

In March 2021, the National Program for the Advancement of Women was adopted by Presidential Decree, as a government agenda to prevent and eliminate manifestations of discrimination.

The document, she stressed, is articulated with the country’s programs, plans and projects related to climate change, promotes the economic empowerment of women, their access to land and other natural resources, as well as greater participation in urban, suburban agriculture and family.

“A high number of women in Cuba are heads of management centers for risk reduction and responsible for early warning points in their territories, or have responsibilities in their communities,” she stressed.

At the end, the official ratified Cuba’s commitment to the full implementation of the Framework Convention on Climate Change and its Paris Agreement.

In her closing remarks, she recalled the leader of the Cuban Revolution, Fidel Castro Ruz, when he spoke at the 1992 United Nations Conference in Rio de Janeiro, Brazil.

The Secretary General of the FMC heads the Cuban delegation to the sixty-sixth session of the Commission on the Status of Women, which will last until March 25 at the UN.

The event meets under the theme: “Achieving gender equality and the empowerment of all women and girls in the context of climate change, environment and disaster risk reduction policies and programs.”

Secret letters from Mary I, Queen of Scots discovered

Risk of bird flu infection in humans is low – WHO